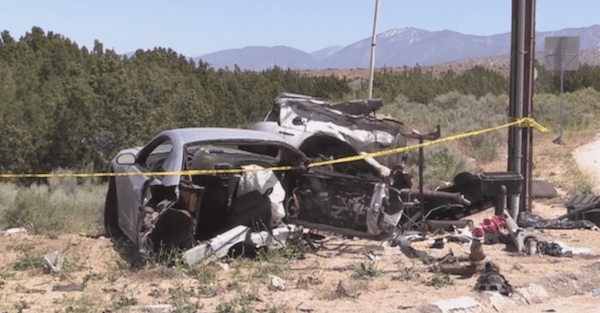 Most Mustang crash videos we see don’t end in anyone getting hurt.  They are usually lower speed burnout or fishtail fails. Unfortunately these two Mustangs are not just going to be the next funny YouTube video enforcing the negative stereo types of Mustang owners.  This pair of ponies were involved in a horrible street racing accident leaving one car split in half.

This happened in Los Angles County at an intersection in the town of Palmdale.  According to Fox 11 Los Angeles a witness saw one Mustang slam on the brakes before the intersection and spin out.  The other wasn’t so lucky and was t-boned by a Mercedes and subsequently hit a pole.  The pole tore right through the car leaving it in two pieces.

Amazingly, no one was killed in this horrific wreck.  Everyone was taken to the hospital and are expected to survive.

Rumble strips and speed bumps will be installed after all this. This area is a known hot spot for street racers and was even nicknamed “Canoga Speedway” after the name of the street. With the Valley Traffic Division street racing task force being disbanded a year ago, a physical modification to the street may be the best way to stop these “Fast and Furious” racers. Los Angeles Police Department?s Valley Traffic Division Officer Troy Williams had this to say according to dailyness.com.

?The faster you go (over the rumble strips), the more annoying it would be, if you?re driving at normal speeds, it will be very unnoticeable.?
Street racing is tempting, but putting innocent lives at risk is never ok. With all the street-style events at drag strips, it’s amazing people still risk everything on public roads. These people got lucky this time, you may not. Be safe and keep it on the track.
Related: This street racing fail is exactly what they deserved