Zora Arkus-Duntov: The Life and Fast Times of Mr. Corvette 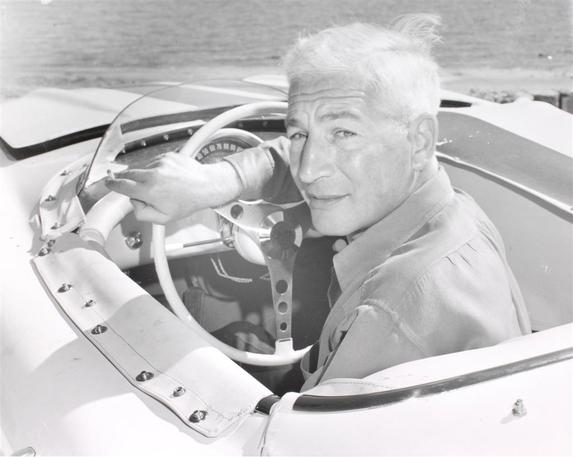 Giving credit to the man who many consider the reason for the Corvette’s long lasting success.

It was not a case of a fascinating car making a man famous. It was a case of a fascinating man making a car famous. When Zora Arkus-Duntov saw the Corvette on display at the 1953 GM Motorama, it did not have all it needed to be a great automobile. However, the Belgian-born engineer knew that he could make it a great car and he suggested that in the letter he sent to Chevrolet. That he got to make that happen changed automotive history.

“While commonly credited as the father of the Corvette, Zora Arkus-Duntov was none of the sort,” wrote Jerry Burton in Corvette: America’s Sports Car Yesterday, Today, Tomorrow. “That distinction belongs to Harley Earl. But Arkus-Duntov is the car’s patron saint, based on his impact in making the Corvette a true sports car and not just a sexy show car.”

Ed Cole–the Chevrolet engineer who sired the 1953 Corvette–told writer Richard Langworth that the “Corvette six was just another leaf out of the MG book.” In his book Corvette: Portrait of a Legend, Langworth compared the fiberglass-bodied Chevy to the sports cars MG created in the 1930s by “tuning” production-type Morris engines for more power. Cole’s job–and he did it well–was to tune the Stovebolt Chevy six for the new Corvette. When Zora saw the car, he knew he could make the Corvette a world-class sports car.

Zachary “Zora” Duntov arrived on Christmas in 1909. His Jewish father was born in Russia and worked as a mining engineer. His mother, also a Russian Jew, was a medical student. They divorced after returning to Leningrad but continued living together. Josef Duntov, another mining engineer, became the mother’s new partner and lived with them. Zora and his brother Yura used both men’s names.

The family moved to Berlin, Germany in 1927, where Zora began a lifelong fascination with motorcycles and cars. Two-wheelers came first, but his parents insisted he change to four wheels for safety, so he purchased an oval-track racing car.

Zora’s European days would make a good movie. He attended Charlottenburg Technological College and graduated in 1934. He wrote for Auto Motor und Sport, a German car magazine. During a visit to Paris, Zora met his German wife Elfi Wolff who danced in the Folies-Bergère. They married in 1939 as the war was starting. Zora and his brother joined the French Air Force. When the Nazis invaded, Zora obtained exit visas from the Spanish consulate in Marseilles. While Elfi sped to Bordeaux in an MG, just ahead of the Germans, Zora and Yura hid in a bordello. Five days later, Elfi joined Zora and his family and they sailed off to America.

In New York City, the brothers established a company called Ardun (Arkus-Duntov) that made military vehicle parts and overhead-valve conversions for Ford flathead V-8s. In 1946, Zora drove a Talbot racing car in the Indy 500 time trials, but failed to qualify. The next year, he drove a Martin racing car, but with the same results. Ardun eventually got up to 300 employees, but a partner ran into financial difficulties and it closed. Zora crossed the Atlantic again to take a job with British sports car maker Sidney Allard. He drove an Allard in the French Grand Prix, at LeMans, in 1952 and 1953. Later, in 1954 and 1955, he won his class at LeMans in a Porsche 550 RS Spyder.

On May 1, 1953, Zora joined Chevrolet as an assistant engineer on the Research and Development staff. He had written Ed Cole to say how he would like to work on the beautiful new Corvette. He soon sent his supervisors a memo titled “Thoughts Pertaining to Youth, Hot Rodders and Chevrolet.” That got him a lot of attention and a new job as director of Chevrolet high performance. However, GM was not very interested in the slow-selling Corvette–until the two-seat Ford T-bird arrived. After that, Duntov was allowed to “fiddle.”

Focused on making the Corvette a true sports car, Duntov turned towards racing. By 1956, he had used a V-8 Corvette to set a new class record at Pikes Peak. He designed a new high-lift camshaft that could make the Corvette go 150 mph. A 1956 Corvette with the 265-cid V-8 and Duntov cam was dragged to Daytona Beach where drivers Betty Skelton and John Fitch drove it during Speedweeks. Zora himself, wearing a yellow helmet and dodging sea gulls, sped to a two-way average run of 150.582 mph. By that fall, Chevrolet advertised, “The 1956 Corvette is proving–in open competition–that it is America’s only genuine production sports car.”

With racing victories came showroom sales and longer lists of performance engines including the fuel-injected 1957 Corvette. At the 12 Hours of Sebring that year, John Fitch and Piero Taruffi made the Corvette a champion. By 1960, a Briggs Cunningham Corvette piloted by John Fitch and Bob Grossman took eighth place at LeMans. The Auto Manufacturers of America (AMA) ban on racing, which took effect in 1957, kept Chevrolet officially out of racing, but Zora was active behind the scenes privately campaigning cars like the Corvette SR2 and helping other racers on an under-the-parts-counter basis.

Despite the AMA’s racing ban, Zora found ways to keep Chevrolet in the minds of racing enthusiasts. In 1960, he engineered and constructed an open-wheel racing car known as CERV I–for Chevrolet Engineering Research Vehicle. It was a single-seat, Indy-type car. CERV I first appeared in public at Riverside International Raceway in November 1960. It generated excitement at a time when Chevrolet was officially out of racing. The car wound up in the Briggs Cunningham Automotive Museum in Costa Mesa, Calif., where it languished for years before making its way to the collector-car auction circuit and generating some controversy over whether it really belonged to GM. It eventually wound up in the MY Garage Museum at Mid America Motorworks.

By the early 1960s, the horsepower race was temporarily back on, driven by Ford’s “Total Performance” push and the Corvette vs. Cobra wars. For Duntov, the Corvette Grand Sport program of 1963 was a front burner project. It was centered on a lightweight Corvette to dominate the international GT racing class cars. A special dual-ignition 550-horsepower small-cube aluminum-block V-8 was to power it, but GM issued an edict forbidding racing. Only five Grand Sports were built. They eventually went to private owners who Zora supported in spite of the ban.

After the Grand Sport project ended, Duntov switched to working on CERV II, a four-wheel-drive racing car on a monocoque chassis. Under its hood was a 377-cid single overhead cam V-8 with an aluminum block and Hilborn injection. The CERV II engine made 500 horsepower and it was driven over 200 mph.

In this era, Duntov launched a push for bigger and more powerful Corvette engines to stay competitive with the new muscle cars. Due to him, Chevy developed such powerhouses as the 1967-1969 Corvette L88, the aluminum-block ZL-1 of 1969, and the ZR1 and ZR2 of the early 1970s. The latter cars could only be sold with Zora’s permission.

During the late-1960s, Zora’s pet project was to bring a mid-engined Corvette out. Styling chief Bill Mitchell preferred conventional powertrain layouts. Duntov did not like many of Mitchell’s ideas because, while stylish, they lacked engineering functionality. He hated the vision-blocking rear end treatment of the Mako Shark II show car and protested to general manager Pete Estes, delaying introduction of the C3 Corvette by more than a year.

Engineering executive Alex Mair disliked Duntov’s complaining and continued involvement in racing. Zora was actually removed from the Corvette program and given a public relations job. No wonder the pre-production “shark” Corvettes had so many engineering problems. The shortcomings were so apparent that Estes brought Zora back to Corvette in July 1967 and officially named him chief engineer for America’s only true sports car. It was about time!

By the early 1970s, Duntov realized that time was running out to develop a mid-engined Corvette. For years, he had battled for such a layout, but GM had its reasons for not signing on to such a car. First, it would be very costly to totally re-engineer the Corvette. Second, the current Corvettes were selling well, so there was little marketing need for a car with such revolutionary changes.

In 1970, Duntov overcame the first roadblock by using the front-wheel-drive Olds Toronado drivetrain, turned sideways, to power the mid-engined XP-882 show car. The Duntov-patented system used a driveshaft that ran through a tube in the engine oil pan to a differential located behind the engine. The car created headlines at the 1970 New York Auto Show and was seen in countless magazines, but it was never produced. Neither was an aluminum-bodied mid-engined prototype called the XP-895 that appeared in 1974. This dream machine was planned around a Wankel engine project that GM eventually dropped.

When he reached mandatory retirement age in 1975, Zora Arkus-Duntov had to step down as Corvette chief engineer. Dave McLellan took over, becoming only the second man to hold that title. Zora stayed active in the Corvette hobby, making appearances at many events. Public relation genius Joe Molina toldAutoTrader Classics about bringing Zora to the first annual Corvette Funfest at Mid America Motorworks, in Effingham, Ill. “When I worked Funfest and Zora was there it was like the Pope had arrived,” Molina said. “People would have kissed his ring and genuflected, if he would have let them.”

Zora and Elfi both made appearances and neither of them ever acted special. In fact, they were always friendly and down to earth when greeting people and signing autographs. Although he was retired and no longer with GM, Zora also remained passionate and knowledgeable about Corvettes.

Zora was named a member of the Drag Racing Hall of Fame and included in the Chevrolet Legends of Performance program. He was inducted into the Automotive Hall of Fame in 1991. The next year, he took part in a ceremony honoring the building of the one-millionth Corvette at the Bowling Green assembly plant. On June 5, 1992, Zora drove a bulldozer at ground-breaking ceremonies for the National Corvette Museum, also in Bowling Green.

On April 21, 1996, Zora died quietly in a Grosse Pointe, Mich. hospital. Six weeks before his death, he was a guest speaker at an event called “Corvette: A Celebration of an American Dream” held at Jack Cauley Chevrolet in Detroit. On hand that night were Zora’s successor Dave McLellan and McLellan’s successor Dave Hill. It has been said that Zora still got the most attention.

When he was inducted into the National Corvette Museum Hall of Fame in 1998, the press release noted, “Duntov understood what an American sports car ought to be, despite the fact that his primary influences were European. His pedigree was drawn from some of the greatest names in motoring history–Ettore Bugatti, Luigi Chinetti, Dr. Ferry Porsche, Sydney Allard, and Carroll Shelby. Duntov, in fact, interacted with all of them and, as with these great men and their own marques, the Corvette, at least in its early years, became the product of Duntov’s singular vision, not of a committee or a focus group.

“Zora was a renegade who believed in himself. He didn’t wait for things to happen, he made things happen–a throwback to a much more romantic, intuitive era. His fortunes took him like a young lad, leaping stone to stone across the raging river of history in the 20th Century. It was inevitable that Duntov, like thousands before him, would file through Ellis Island in search of a new life, a new opportunity in the United States. But Duntov didn’t just live the American dream; he helped to invent it by immortalizing one of the foremost expressions of fun and freedom, the Chevrolet Corvette. Upon Zora’s death in April of 1996, columnist George Will wrote, ‘If you do not mourn his passing, you are not a good American.’”