Here’s everything you need to know about the People’s Car: The Volkswagen Beetle 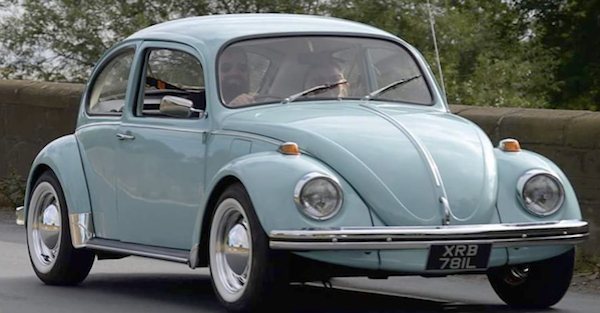 The fun loving, hippie driven, brightly colored Volkswagen Beetle was in part created by one of the most evil human beings to ever walk the face of this earth.

In 1933, when Adolf Hilter came to power in Germany, he ordered a new system of freeways called the “Autobahn.” He also wanted to build a small car that could be sold to the working class of Germany. To develop this car he called upon none other than Ferdinand Porsche.

A few years earlier Porsche had developed a car called the “Type 32.” In a meeting with Porsche, Hilter made modifications to sketches of the type 32 saying that it should look like a Beetle saying:

“You have to look to nature to find out what streamlining is.”

From there, Porsche designed what was originally call the “Volkswagen,” which literally translates to the “People’s Car.”

Hilter required the car to be very fuel efficient so the car was made with a 1 liter four cylinder engine and was able to travel about 62 miles on less than 2 gallons of fuel.

During the construction of the factory where the car would be produced, Hilter named the car the “KDF” which stood for “Strength through Joy.” If you wanted to place an order for the KDF you were issued a payment booklet. In order to pay for the car you would purchase stamps from the German Government and only until you paid in full would you be able to take delivery of the car. It was a strange early form of “layaway.” Delivery of the car was very odd as well. You would need to find a way to the factory to physically pick up your new car. If you didn’t have transportation the car would be delivered for a 5% fee.

In 1944 Allied Forces bombed the Volkswagen plant that had been converted to build military vehicles. Only by dumb luck was it not completely destroyed as one of the bombs never went off leaving 1/4 of the plant intact. After the 2nd World War ended, Ivan Hurst of the British army was given the task of rebuilding the plant in order to supply Allied forces occupying Germany, with reliable transportation.

In Germany the car was nicknamed the Beetle and after the days of Hilter. The name stuck and VW decided to officially market the car as such. Eventually, over 20 million Beetles based off the original platform were produced. The last being produced in Mexico. The car changed so little over the years that it is possible to mount a 1936 body on a 2003 chassis.

Since 2003, the Beetle has been redesigned twice and still remains a very popular car for those looking for something small, fuel efficient and affordable.  Although, now we have lease specials and 0% financing.