This Plymouth Hemi ‘Cuda could be yours 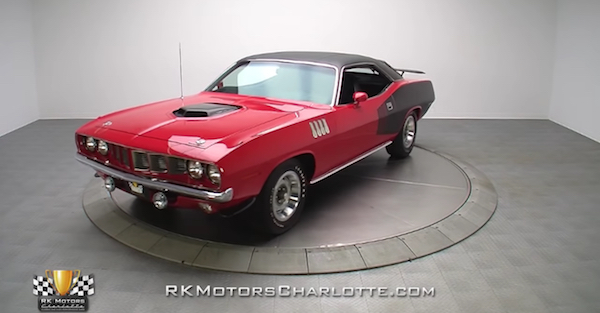 Do you have $1.3 million to burn and an empty car port? Boy, is there a deal on the market for you lucky person-that-I-wish-I-was. RK Motors Charlotte in North Carolina is offering an original 1971 Plymouth ‘Cuda, with the hemi, for just under that price.

If over a million dollars sounds a little steep, it’s because it is. But the car comes with original everything, including the engine fluids and 70’s-era air in the tires. But it’s more than nostalgia that drifts this car into the high price market; this particular ‘Cuda was owned by the late Tobacco-empire heir, Zach ?Dr. Zacho? Reynolds.

Reynolds bought the car new from Ed Owens Chrysler-Plymouth in North Carolina and broke the mold by slamming that Hemi-ladened monster with every option it could carry. Reynolds had a ton of cash, so you can’t fault his spending habits. Unfortunately, or fortunately, if you’re into that sort of thing, Reynold died in a plane crash 1979, giving him a scant few years to enjoy his ride.

Still need convincing? The ‘Cuda is a bargain after being dropped by over a million from its price of $2.4 million last year.

Related: The Beautiful Sound and Looks of the 1970 Plymouth Barracuda