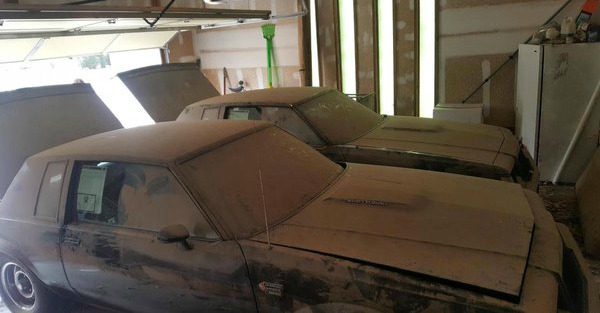 Barn finds have always intrigued me and I once missed the opportunity to purchase two practically new 1970 Pontiacs.  One a Lemans and the other a GTO. Both were sold before I could get there.

Luckily for William Avila and Shawn Mathews, they will never have to lay in bed at night wondering what could have been.

Their story on GM-EFI.com tells of how these two best buds embarked on a journey that will forever solidify them in the history of the 1980?s classic, the Buick Grand National.

After being tagged in a post with two 1987 Grand Nationals for sale, William contacted the owner and set up a time to meet. He brought his best friend Shawn Williams along for the ride to a small town in Oklahoma. The owner took them to an old house and raised the garage doors.  Sitting in layers of dust and dirt were two of the best cars the 80?s had to offer. They looked at each other in amazement. After the initial high wore off, they began to inspect the vehicles.

This part gave me goose bumps: Williams reported on turbobuick.com that the Vin numbers were consecutive and the option codes were the same. This means these were true twins that rolled off the assembly line one after the other. They had been together for 30 years, rarely driven and wearing the original window stickers.

One car had 592 miles and every document from the factory intact. The other was a bit more weathered, but still remarkable, with only 807 miles. Both had sagging headliners and one looked to have attracted an animal that relieved itself in the back seat.

That day, the two friends went home empty handed as the seller was not ready to let them go and was firm on his price of, get this, $200,000 for the pair. Some time passed and on March 28th this year Shawn called William and said, ?You won?t believe it buddy but the twins are coming home with us!?

Apparently, Shawn was able to strike a deal and the cars are currently in his possession undergoing an extensive cleaning along with minor repairs including all new fluids and many gaskets.

They claim the cars will always stay together and will be shown as twins at local car gatherings.

You may be wondering what they ended up paying for these time capsules.  Although I don?t have an exact figure, William later revealed in the same thread on turbobuick.com that they were both purchased for less than a quarter of the original $200,000 asking price. Well done, guys!

Another member joined in and commented that he had seen the pair for sale eleven years earlier and was not able to reach an agreement on price. He claimed the previous owner wanted $50,000 each and was, ?Kind of a grouchy ol? guy.?

Happy to see these twins staying together. I wish them nothing but the best and can?t wait to see the finished restored product.