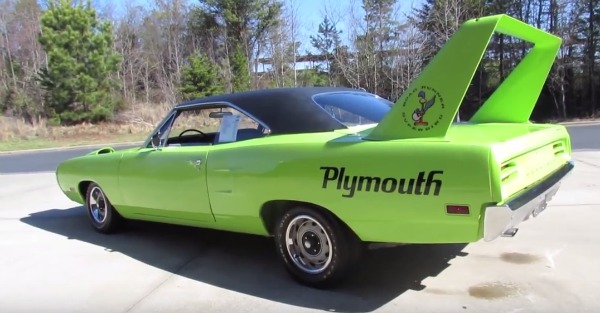 One of the most iconic ?back to basics? muscle cars of the 60s & 70s may have wore the badge of a funny little cartoon character, but that didn?t mean the Plymouth Road Runner wasn?t ready to rumble with the best of them.

Released in 1968, the Road Runner sales blew Plymouth?s expectations out of the water.  They had originally expected to sell 20,000 units but ended the year with about 45,000 sold.  Their formula of a cheaper, high powered bare bone muscle car paid off, and being associated with the familiar cartoon character didn?t hurt either.

The car came standard with a stout 383 CI ?Road Runner? V8 that made 335 horsepower and 425 ft lbs of tireshredding torque.  For only $714 extra you could opt for the 426 Hemi rated at 425 horse and 490 ft lbs of even more tire shredding torque. You were given a choice to row your own gears with the floor mounted 4-speed manual or sit back and relax with a three-speed TorqueFlite automatic.

The Road Runner was known as a low option, serious muscle car.  It came with a vinyl bench and no carpeting. If you wanted to add options you were given a very short list to choose from including an am radio, air conditioning, power steering and transmission choice.

The Road Runner and subsequently The Coyote names were rented from Warner-Bros for a sum of $50,000 or in today?s dollars, about $350,000.  Plymouth also paid $10,000 at the time to develop the well know ?beep beep? horn sound.