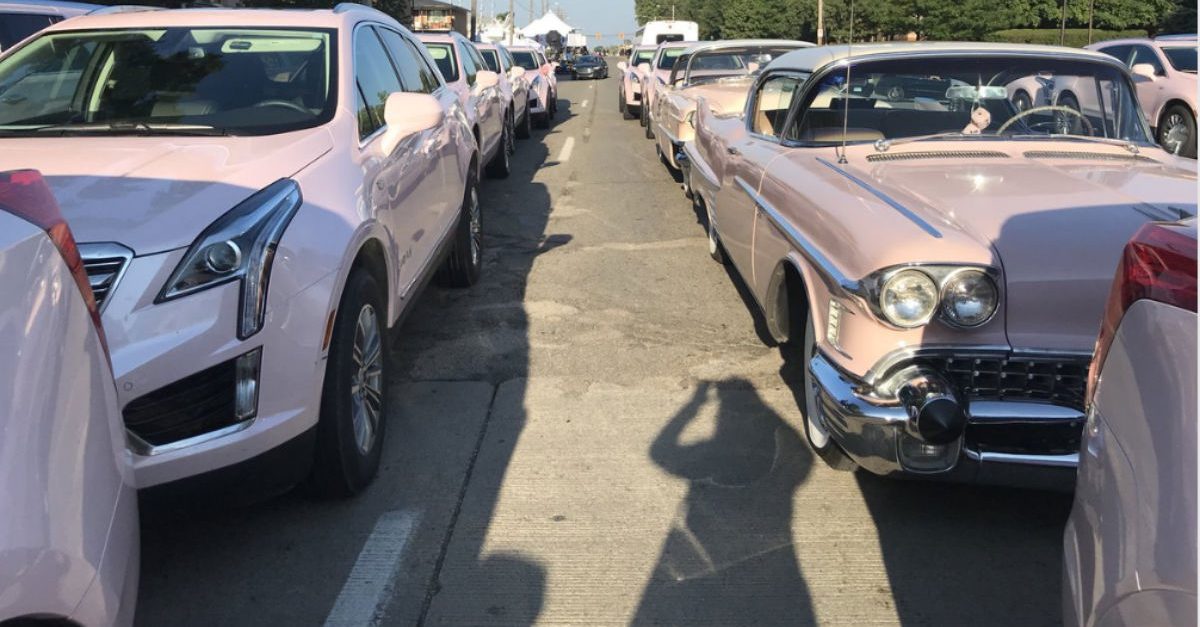 In Aretha Franklin’s 1985 song “Freeway of Love,” she sings, “We’re going riding on the freeway of love in a pink Cadillac.”

More than 30 years after the release of that song, Franklin had quite a few pink Cadillacs to choose from, as around 130 of them gathered outside of Franklin’s star-studded funeral service in Detroit, Michigan Friday morning for the perfect tribute.

In the line of #PinkCadillacs outside Greater Grace Temple in honor of Aretha Franklin. pic.twitter.com/xGU0tU2f3R

Read More: Aretha Franklin?s 1940 LaSalle Hearse Has Quite the History

Crisette Ellis, who is a sales director for cosmetics company Mary Kay (which actually awards its top salespeople with pink Cadillacs), says that she and her husband, a pastor at Greater Grace Temple, came up with the idea.

“My husband said, ‘Wouldn’t it be awesome if we could have a sea of pink Cadillacs parked on Seven Mile Road to greet Ms. Aretha Franklin as she arrives?'” Ellis, who pulled up to the service in a pink Cadillac Escalade, told NPR.

While Franklin was born in Memphis, Tennessee, she moved to Detroit at a young age, getting her start singing gospel at New Bethel Baptist Church. She would later go on to become a Motown legend, putting out classic hit after classic hit. But “Freeway of Love” holds a special place in the hearts of most Detroiters.

“‘Freeway of Love’ is like an anthem for us Detroiters,” said musical director Kern Brantley, who led rehearsal for an Aretha Franklin musical tribute. “[It] starts off with a Motown beat, and that’s the pulse of the city.”

It’s only fitting, then, that so many pink Cadillacs would show up to honor the Queen of Soul.

“This is a show of respect,” Ellis said.

Read More: Aretha Franklin?s National Anthems at Big Sporting Events Were Unlike Any Other