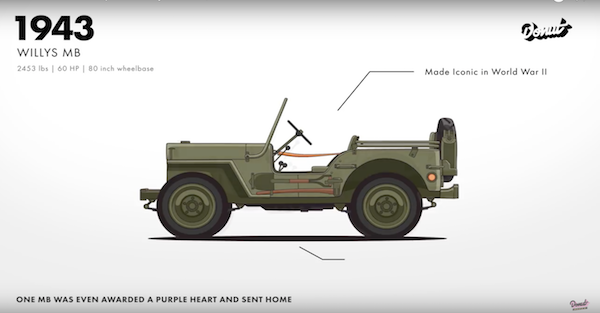 It may be hard to tell looking at a new Jeep Wrangler, but the 4×4 Jeep Utility Vehicle has gone through many changes over the years. Long before it was even called the “Wrangler” in 1987, Jeeps were purpose built, war fighting machines. Originally, the Jeep was built for the U.S. Army for World War II. The first units were hand built, and they totally changed the way wars were fought. Eventually, the Jeep was domesticated and sold for use on public roads. They immediately developed a cult following, and are now one of the best selling, highest resale value holding, vehicles on the road.

In this video by Donut Media we see the entire history of the Jeep 4×4 Utility Vehicle.