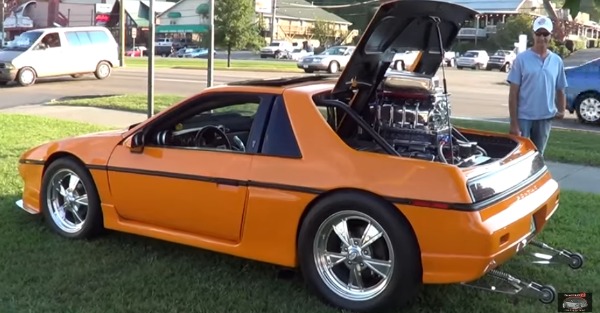 Ah, the Pontiac Fiero.  An American classic for all the wrong reasons.  The thought behind the Fiero was simple and understandable at the time.  1979-1980 brought us the 2nd oil crisis and GM was scared people would shy aware from sports cars like the Corvette.  They came up with a mid-engine tiny sports car with a 4-cylinder engine.  Realizing the oil crisis was over, GM added a V6 to the Fiero and all was good in the world until 1988 when the car was forever laid to rest.

Well, for a man named Tracy the six-cylinder was just not enough.  Gas is sort of cheap now, so why not drop in a V8?  While you’re at it, add a ginormous roots style blower that looks like it could suck up a cow and not even know it.

To be specific, this is a 455 Oldsmobile engine with a Toronado drivetrain.  Along with the obvious supercharger on top, the engine is fitted with fuel injection and is intercooled.  When Scottie from the ScottieD YouTube channel asked the man what possessed him to do this, he responded,

” I wanted a car that would hook up, with a big-block.”

Uh, ok then, good enough reason for me. Towards the end of the video, Scottie shows us the car running and a view from inside the cabin.  I don’t know about you, but that massive blower belt freaks me out.  Imagine that monstrosity right next to your head.  Believe it or not, he did not reinforce the frame where the engine sits. He added a roll cage and subframe connectors and called it a day.  Although he’s not had this setup on a dyno, Tracey tells us what counts: It runs 11s easily.  To top off it all off this car is totally street legal and he plans on reinstalling the air conditioning.

Safe to say the original design of a fuel efficient sports car is out the window. But who cares, this thing is freaking cool!