This is how you build and jump a General Lee without destroying a classic Charger. 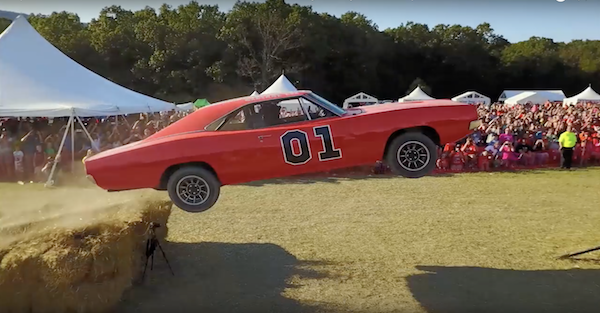 You can?t watch Dukes of Hazard, and not feel a little guilty that your viewing pleasure comes at the cost of a Classic Muscle Car. An estimated 300 Chargers were destroyed during the original series alone, and the number of surviving Chargers has declined dramatically since the show’s heyday. People still want to see the General Lee fly so, what are we to do?

Well, a man named James ?Ski Car Stunt? Smith has it all figured out. Smith had worked with ?Dukes Fest? for 17 years and jumping the old General Lee was what he did. When tasked with the job of stunt coordinator for the 2017 Dukes of Hazzard Fan Festival at an event call the Cooters?s last Stand, Smith needed yet another old Charger to jump and subsequently destroy.

James had enough of destroying perfectly restorable Chargers, so he came up with an ingenious plan to use a much more common vehicle. Smith found an old 1999 Crown Victoria Police cruiser and transformed the car into what looks to be a fully restored 1969 General Lee Charger.

Smith completely stripped the car down to the frame, leaving the drivetrain intact. He ordered replica body panel and began welding and fabricating until the car was complete. From the outside it?s a normal General Lee Charger, orange paint and all. Since the car?s only job is to look the part and survive multiple jumps he left the Crown Vic interior alone. James with the help of his brother and friends put this entire project together in 12 days, and unless you get up close and take a peek inside, you?d have no idea this wasn?t the real thing.

The car performed flawlessly at the event and when asked if he would build and sell more of these Crown Vic/General Lee creations, he responed with a ?maybe.? So you?re saying we have a chance?