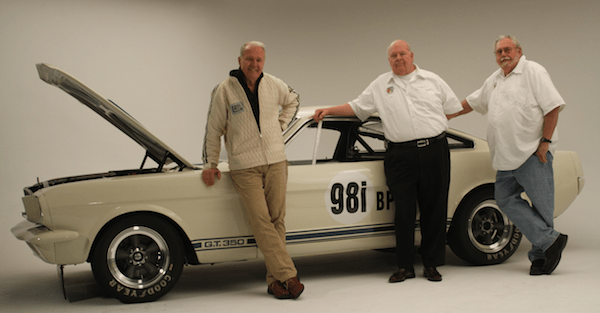 The group who originally built the 1965 Shelby 350R are getting together for a limited production run at the car that started it all. Known as the “Original Venice Crew,” the trio consists of Peter Brock, Jim Marietta and Ted Sutton. The three worked in the Venice, California shop from 1962-1965 and were an integral part of the transformation of the original “K code” 2+2 Mustang into the race dominating Shelby we all remember.

They will make 36 units, which is exactly the number of “R” models made in 1965. They will be produced using fully reconditioned bodies, the standard 4.7-liter, 289 cubic-inch V8 from Carroll Shelby Engine Co and a four-speed manual transmission. They are going to introduce three experimental upgrades that were thought of back in the 60s but never implemented due to time restraints.

The new, original Shelby’s will have a upgraded front valance, Plexiglas rear windows with three-quarter windows, and an independent rear suspension.

During an interview with Road & Track Brock said this:

?The revised shape of the window improves the car?s interior aerodynamics by promoting better airflow for driver comfort while the new front valance has a much closer identity with the original Mustang front-end while increasing the efficiency of airflow to cool the engine,? said Brock. ?While these changes may look subtle, they combine with the new suspension to dramatically change the character of the car.?

The cars will be built in Southern California and each car will be given a Shelby serial number. These cars will have no limitations and can be raced or registered and street driven.

These limited production Shelby’s will not come cheap, with a starting price of $250,000. The Shelby will go into production in the fall of 2017 and you can go to ovcmustangs.com for more information.

Related: Here is everything you get when you add an ‘R’ to the Shelby GT350