Here’s everything you wanted to know about the Chevy El Camino. 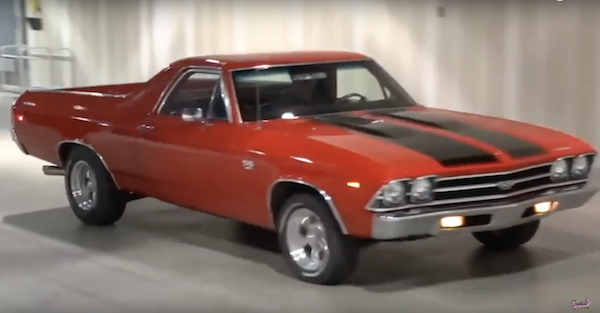 The Chevy El Camino is one of the craziest vehicles to ever come out of Detroit. It was a purpose built car/truck that Chevy basically copied from the Ford Ranchero. Released in 1959, two years after the Ranchero, the El Camino sold over 22,000 units in its first year.

This success didn?t last and the car was discontinued for 1961. After Ford began building the Ranchero off the Ford Falcon chassis, Chevy once again copied their competition by using an existing platform to bring the El Camino back. In 1964 the El Camino returned, and it was based off the Chevy Chevelle.

With Chevy Hell bent on marketing the El Camino as a truck with the comforts of a car, they didn’t immediately release a performance SS model. The 1968 model came close with a 396 cubic inch V8 packing 375 horsepower, but it wasn’t until the following year that Chevy would officially enter the El Camino in the Muscle car war. For the 1969 model Chevy released the SS and in 1970 you could order an insane 454 cubic inch V-8, with a whopping 450 horsepower and 500 lb-ft of torque.

The early 70’s brought on the gas crisis and this was the beginning of the end. Although power was drastically reduced in favor of fuel efficiency, the 1973 was Chevy’s best selling El Camino. The fifth generation was released in 1978 and by this time its handsome styling and powerful engines were long gone. With slow sales and less than stellar reviews, the manufacturing of the car was moved to Mexico in hopes to save on costs. This only lasted a couple years and in 1987 the El Camino was discontinued once again.

We haven’t heard much for a come back of the El Camino. GM’s Australian Holden brand made a truck/car hybrid call the Ute, but unfortunately it was never sold state side. We may never see another El Camino, but the car achieved cult status long ago and will live on as one of the coolest American cars around.