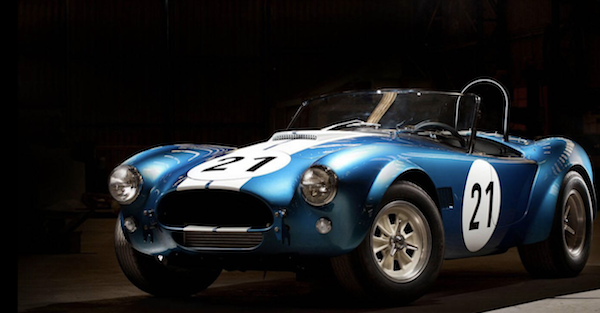 If your dream is to own a new Shelby Cobra, you?re in luck. A company called Superformance now builds the iconic racer, and they’re sold under the name Shelby Legendary Cars. Their newest build celebrates Bob Bondurant who is one of the most accomplished and well know Shelby drivers.

The Shelby Cobra that Bondurant raced to win America?s first and only FIA GT title had a chassis code of CSX2345. This is the specific chassis that Superformance will be replicating for the special edition Shelby commemorating the legendary racer.

According to carscoops.com, Bondurant said:

?I?m very proud to have been behind the wheel when we won the FIA World Championship on July 4, 1965. That victory was for everyone in America.?

The special edition Cobra will feature the same frame design as the 2345 chassis, the same suspension, diagonal roll bar, raked windshield, and driver?s knee pad. It?s sold as a roller so the owner can choose what engine and transmission combo fit their needs best.

Buyers have a choice between fiberglass or aluminum bodywork, and they can pick if they want to replicate the set up for the Spa in 1964 or the Rossfeld Mountain Hill Climb of 1965. There is a Daytona coupe version as well which replicates Bondurant?s CSX2601 chassis, and you can opt for aluminum bodywork in either 1964?s Viking or 1965?S Guardsman blue.

The new Cobras will be unveiled at Barrett-Jackon in Scottsdale this week. 50 units will be produced, and they start at $149,995 for a fiberglass roadster, $249,995 in you want to go aluminum, $289,995 for an FIA-spec track version and $394,995 for the Daytona Coupe. No matter which route you go, a day of training at the Bondurant Racing School in Arizona is included. Get your checkbooks ready as Barrett-Jackson will definitely bring the right kind of buyers for this type of car, so they will sell quick.

Related: The spiritual successor to the Shelby Cobra hails from Japan