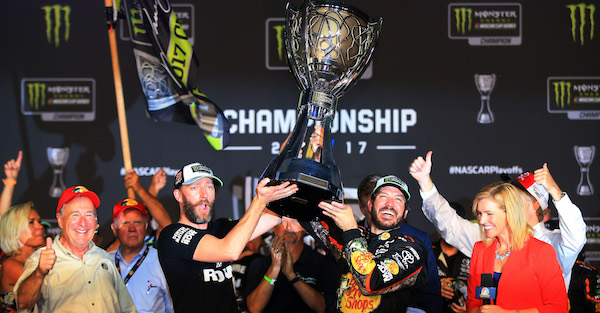 With the victory in the Ford EcoBoost 400, Truex, Jr. became one of 15 different drivers since 1972 to win eight or more races in a season, reports nascar.com. As a bonus, the win gave Truex, Jr. his first Cup title.

While eight victories are nothing to sneeze at, Truex, Jr. has got a long way to go to catch some NASCAR legends. Richard Petty and Jeff Gordon hold the top position with 13 victories in a season. Petty accomplished the impressive feat in 1975 while also winning one of his seven Cup titles. Gordon won 13 races in 1998.

Darrell Waltrip had back-to-back 12-win seasons in 1981 and 1982, also winning two of his three Cup titles. Dale Earnhardt, Bill Elliott, and David Pearson all won 11 races in a season, but Pearson?s is impressive for the fact that he did it running only 18 races.

Several drivers have won at least 10 races in a season, but it?s worth mentioning that Cale Yarborough had four seasons where he won 8 or more races, the last back in 1978. It?s a feat that has not since been matched.