The “Hitter 5.0” Continental is a mobster’s dream. 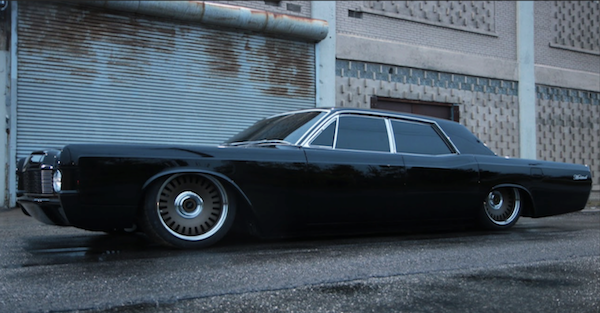 When you think of an old school Lincoln, you think of a land yacht floating on a cloud. The Lincolns of the 1960s defined the word cool, and it makes you wonder where Ford went wrong. To make up for the Lincolns we have today, tuner company Roush teamed up with Mobsteel to build the Ultimate 1968 Lincoln Continental.

The ?Hitter 5.0″ as they call it, was one of many cars featured at the Roush booth at SEMA this year. The car was built at Mobsteel in the heart of the Motor city, and pays tribute to the hard-working people in Detroit that made a car like this possible. Painted in Axalta Cromax Super Jet black basecoat, coupled with Axalta?s Premier clear coat, the exterior styling was kept very subtle. The car rides on Detroit Steel Wheel Company wheels that feature a custom cutout pattern called “Lincoln Park,” named after the Detroit suburb. Hints of burnt bronze can be seen in the wheels, calipers, grill and custom badges.

Powering the Lincoln is none other than Rousch’s supercharged  Aluminator 5.0 liter V-8 that produces a crazy 727 horsepower. Sitting behind this beast is a six-speed automatic transmission because you can’t be bothered with gear changes in a luxury Lincoln. Other note worthy features include a custom stainless steel exhaust system, AccuAir e-level air management with touchpad Endo VT tank and a JL audio sound system.

No expense was spared on the interior as its fully lined in sound deadening Dyanmat, and a complete custom upholstery by Detroit Interior Works.

The match between Mobsteel and Roush was one made in heaven. Let’s hope they get together on many more builds in the near future.