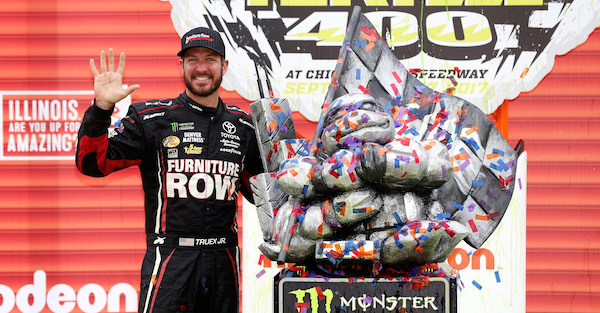 The first postseason race of the 2017 season was uneventful, and the majority of NASCAR fans were underwhelmed by the race overall according to a recent poll.

Veteran NASCAR reporter Jeff Gluck conducts a poll on Twitter after each race to determine whether the race was good or not. There are only two options to the poll, yes and no, and he’s been conducting the poll for the last two seasons.

According to Gluck’s poll after Chicagoland, only 30 percent of 6,564 voters thought it was a good race. The other 70 percent voted no, which puts the race in the bottom five for the last two years.

Was Chicago a good race?

Related: Here are the highlights from the first playoff race of 2017 at Chicagoland

Was Chicago a good race? Only 30% said yes, putting it in the bottom five of all races polled in last two years. https://t.co/KlCZI7w8NV

It’s easy to understand where fans are coming from here. There weren’t any major crashes, and Martin Truex Jr. and Kyle Busch dominated the entire race.

It might’ve polled better had it not been a playoff race, but fans were probably looking for more fireworks considering it was the start of the postseason.

Perhaps Sunday’s race at New Hampshire will produce a better result as playoff drivers look to make it into the Round of 12.