The McLaren 570S took the automotive world by storm when after it was unveiled at the 2015 New York International Auto Show. The rear-wheel-drive sports car spawned a number of variants, including the MSO X and the subject of this piece: the 600LT.

Different numbers and letters aside, what sets the McLaren 600LT apart from the other models in its class? Let's take a look.

How Much Does the McLaren 600LT Cost?

The base MSRP on the McLaren 600LT supercar is around $242,500. As far as super luxury sports cars go, that's about on par with Italian supercars like the Lamborghini Huracan.

But what, exactly, does that serious pile of bones get you? Let's take a peek into the McLaren headquarters in Woking, Surrey, England, to find out the McLaren 600LT's impressive specs and amenities.

"Fast" is a subjective term. To the snail, the turtle might be speedy.

So, is it fast? If you happen to be driving in the carpool lane next to it, you will likely blink several times and feel a tight ball of jealousy swell in your throat. But, if you're already driving a Pista, don't worry about it. 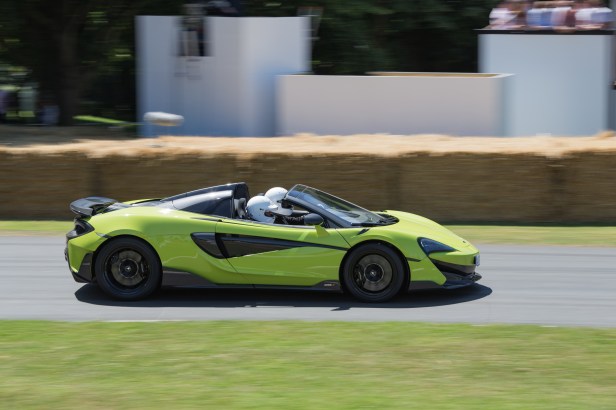 How Do You Create a Coupe That Moves Like That?

According to McLaren, this is the "fastest, most powerful, and extreme" in the "Longtail" series. And, it's street legal, to boot.

To rewind a little bit here, there are only three McLarens that have earned the "Longtail" designation. The first was the 1997 F1 GTR Longtail. In 2015, the 675LT coupe and 675LT Spider joined the family. The 600LT Coupe and McLaren 600LT Spider versions round out the family tree as of 2021.

The secret is an actually long tail. Engineers discovered that elongating the rear end of the vehicle by 47mm and adding a carbon fiber fixed rear wing and diffuser would improve downforce and reduce drag. Simple aerodynamics, of course.

Also, the 3.8-liter V8 twin-turbo engine that provides 592 horsepower and 457 lb-ft of torque probably helps things along nicely. Paired with RWD, the latest additions to McLaren's Sports Series are tight, bright, and in control.

You've also got the seven-speed dual-clutch automatic transmission, equipped with Ignition Cut technology, which cuts the fuel supply at the moment of shifting to make it essentially instantaneous, and Inertia Push, which uses naturally occurring kinetic energy to push extra torque into the next gear. Long story short, there is no pause during upshifting with this powertrain. You just move faster.

The McLaren 600LT Coupe and convertible Spider version are both constructed on an ultra-strong carbon fiber chassis, and include Pirelli Trofeo 225-width track tires for a solid base. The front splitter helps pull the front end down, and air intake is hidden all around the car to keep the engine and brakes cool.

It's a lightweight hypercar (with a curb weight around 3,000 pounds), balanced and solid, simultaneously obeying the laws of physics and causing your eyes to water as you accelerate smoothly. 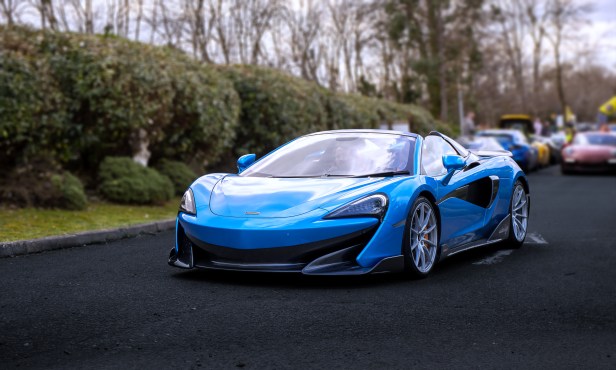 Living With the McLaren 600LT

Interestingly enough, the McLaren 600LT doesn't absolutely inhale gasoline. Emissions and fuel economy are very important in Europe, so the Coupe and Spider each make an EPA-estimated 15 and 23 city/highway mpg. Allegedly. If you're going the speed limit.

Inside the cabin are the racing seats borrowed from the McLaren Senna, along with a flat-bottom race style steering wheel.

Otherwise, the cabin is a bit sparse, on purpose. Less weight means faster car. Of course, you have your standard safety features. Can't be street-legal without airbags. There is also a seven-inch touchscreen infotainment system with Bluetooth and navigation, and a standard four-speaker sound system. You'll also find a rearview camera and front and rear parking sensors on board.

Features like climate control are not standard, but can be added. But, be honest with yourself: Do you really need air conditioning when you're driving a McLaren Spider?

When creating the McLaren 600LT supercar, the automaker clearly put the highest amount of detail and attention into the bodywork and drive style. It's gorgeous to look at, even if it's typically moving too fast for your eyes to physically focus on the details.

So, for those looking for a new car that can actually change the pitch of your voice while accelerating, look no further than the McLaren 600LT. Now, to decide between the coupe or the Spider version...