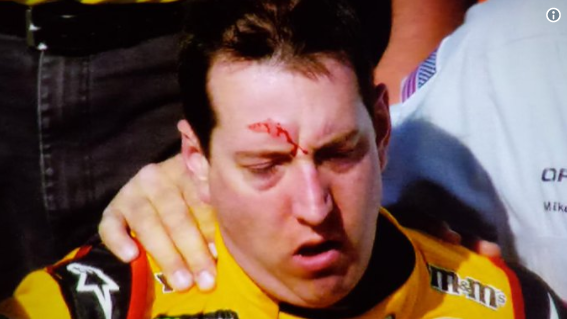 What better way to celebrate the Christmas season, than with some blood, a black eye, and of course NASCAR.

Landon Cassill and Matt Dibenedetto took a look back at some of their favorite moments of 2017 for Landon and Matt’s Christmas Presents on Fox Sports. And what would be a look back on the season without another look at the brawl between Kyle Busch and Joey Logano at Las Vegas.

“There’s nothing like sucker-punching a guy and you being the guy that ends up with blood though,” Cassill said.

Towards the end of the video, they show a clip of Busch being interviewed while wearing sunglasses.

“I laughed at it when that was happening because he had sunglasses on and it was like ‘he’s covering his eye’,” Cassill said.

It was by far one of the more memorable moments on the season and hands down the best on-track feud of 2017.

The two had gotten to a point, where they had just had enough of each other. After Logano got loose underneath Busch on the final lap of the Kobalt 400, he tapped Busch sending him sliding out of control just before the checkered flag.

So Busch, in his hometown, headed over to Logano’s pit box and threw an overhand right that clearly took Logano by surprise, but as we all know Busch is the one that was injured.

Tensions died down between the two as the season progressed, but the strong dislike was still apparent. It seems as if Busch never quite got over it, after he blamed Logano for costing him a championship at Homestead.

It will be interesting to see if any of it carries over into 2018, as it would definitely make for some must-see TV.