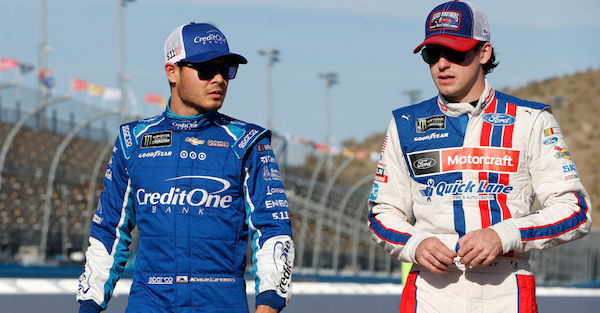 Less than two months ago, Kyle Larson had the most points of any driver this season and sat atop the standings.

Now, Larson is third in the points and has two DNFs and five races where he placed 23rd or worse. His crew chief, Chad Johnston, was also suspended for three races during that stretch.

Larson tweeted about his struggles the last few weeks, but he seemed optimistic about turning things around soon.

Been a rough few weeks but now we start getting back to my favorite tracks. Hopefully can turn the momentum around.

The good news for Larson is that he’s returning to a track where he’s had plenty of success in recent races. This Sunday’s race is at Michigan International Speedway, and Larson has won the last two races at the track.

NASCAR America’s Slugger Labbe said he thinks Larson and his crew “detuned their cars” following Johnston’s suspension, but he expects Larson to rebound this weekend at Michigan.

Parker Kligerman said if Larson struggles at Michigan, then it might be time to be concerned.

“When he goes to Michigan and they?re suddenly not as fast at Michigan as in recent months and last year, then there?s a question mark,” Kligerman said. “That?s going to be great for them to find out.”

Larson can end any concerns with a win or at least a good finish on Sunday, but if he struggles again then it might be time to panic about the No. 42 car entering the postseason.