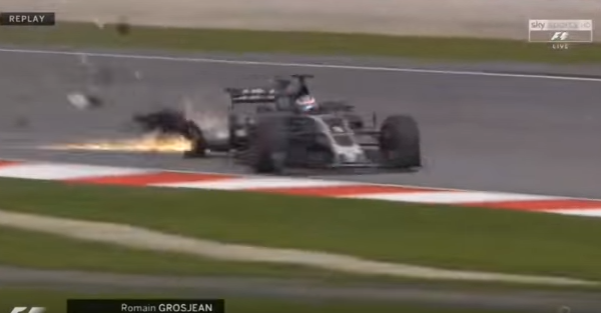 There are lots of things you need to worry about as a Formula 1 driver. It?s a safe bet that hitting a loose drain cover was not one of them. Now it is.

F1 driver Romain Grosjean was on a practice run for the Malaysian GP when his right rear tire blew out and he crashed into a barrier. FIA officials investigated and tell Motorsports.com they believe a welding failure on a drain cover caused the cover to come loose and lift.

?One of the drain covers, which measures about half a metre long and 30cm wide and heavy cast metal, came up,? FIA F1 race director Charlie Whiting told Motorsport.com. ?There are quite a few of them around the circuit and at this particular place, there are five at intervals on the outside of T12.?

FIA says engineers will now inspect the whole track and check for signs of other weld failures. They say that many of the covers are bolted down, but where the bolts had previously failed, engineers made welds.

?Welding is perfectly acceptable. I suspect the bolts have probably broken and rather than replace the whole thing, they?ve thought, ‘we?ll weld it down’. Quite evidently, the welds just gave up. It?s as simple as that really. No one saw that coming,? Whiting said.

Sepang International Circuit chief executive Dato’ Razlan Razali says this was a freak accident and not indicative of poor maintenance.

?It?s a concern for us. Safety is the first priority for everybody. It?s the first time it has ever happened. We do our regular maintenance but even if we go around and lift every single drain up, for us, it?s as fixed as it can be. The best thing is to improve for tomorrow.”