Dale Earnhardt Jr. looks back on his year in sport by producing a very cool video 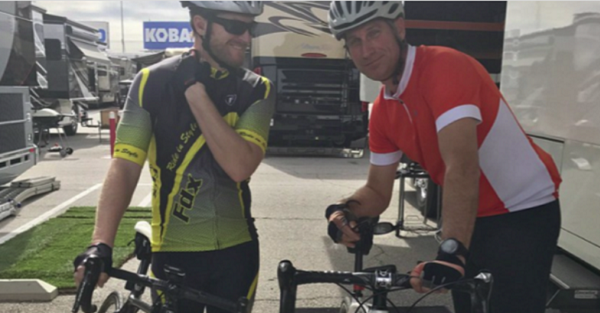 With 2017 coming to a close, NASCAR veteran Dale Earnhardt Jr. tweeted a video of his sporting achievements this year, but it’s not what you’d expect.

Sure, this past season was not Earnhardt’s best. He only managed eight top-10 finishes, didn’t win a race, and ended the year 21st in points, but he did win two poles and captured his 15th consecutive NASCAR Most Popular Driver award. However, none of this made it into Dale Jr.’s new video.

That’s because the video Tweeted by Dale Jr. was from Strava, which is a mobile app and website that connects runners and cyclists through the sports they enjoy, according to Stava’s website.

Dale Jr. took up cycling earlier this year after team owner Rick Hendrick mandated that employees maintain a certain level of fitness. In an interview with The Charlotte Observer, Dale Jr. said his teammate Jimmie Johnson tried talking him into riding for the better part of a year.

Johnson himself is an avid cyclist and passionate about fitness in general. The seven-time NASCAR champion competes in triathlons when he isn’t on the race track. Still, Dale Jr. had his reservations. First off, he didn’t want anyone seeing him in spandex riding shorts, but Junior said he let go of that worry after riding his first 15 miles with Johnson.

?Man, after you ride 15 miles, you kind of quit giving a crap,? Earnhardt said.

“I thought that would bother me awhile. But I don?t care. Now I?m like, ?Here I am in Spandex, I just rode 30 miles? … nobody?s gonna be able to talk crap about that.?

If you watched Earnhardt’s video, you’ll see he covered more than 2,066 miles on the year.

With his new passion for fitness, Dale Jr. could have room for a few more beers during the week.