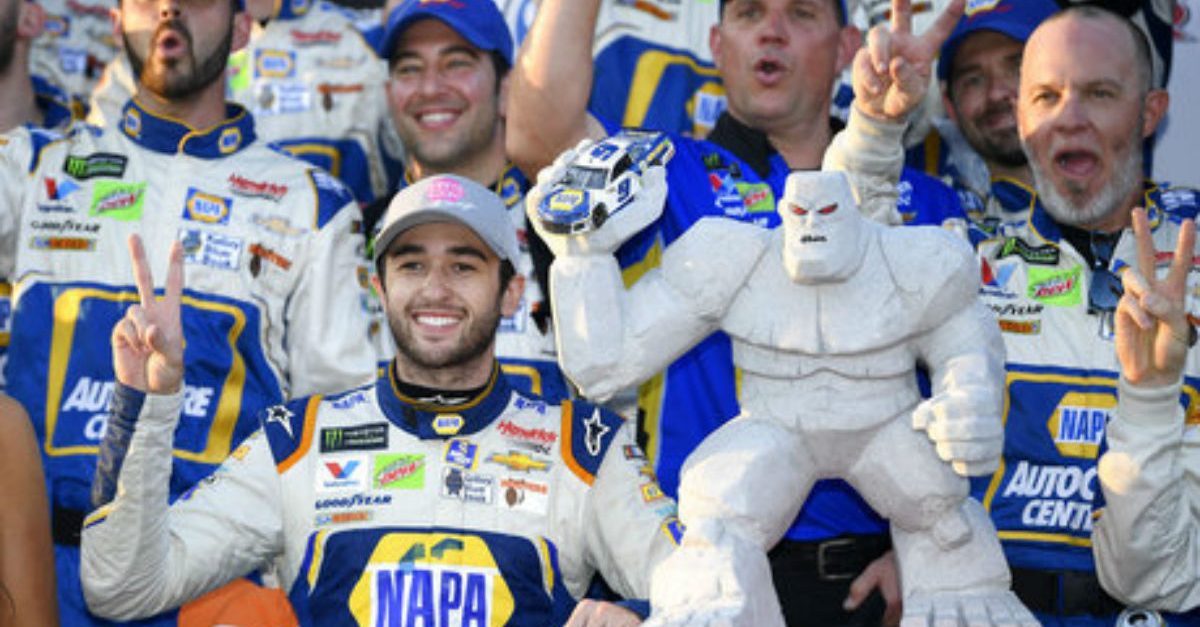 DOVER, Del. (AP) ? Chase Elliott had been burdened by lofty expectations that come as the son of a Hall of Fame driver and the replacement of a four-time NASCAR champion.

As the close calls and frustrating finishes mounted, and wins eluded him, the 22-year-old Elliott could feel the pressure tighten each time he slipped into the No. 9 Chevrolet.

But once Elliott raced to his first Cup win, the second victory wasn’t far behind, and now the Hendrick Motorsports star pegged as NASCAR’s next most popular driver is thinking championship.

CHASE ELLIOTT WINS IN DOVER! Retweet to congratulate the No. 9 team.

“There isn’t any reason why we can’t make a run at this deal,” Elliott said.

Elliott stayed off pit road during a late caution and avoided similar disasters that struck the Stewart-Haas Racing drivers to pull away and win in overtime Sunday at Dover International Speedway. Elliott earned an automatic berth into the next round of the NASCAR Cup playoffs.

Eight races after his first win at Watkins Glen, Elliott was back in victory lane again ? another needed dose of good news for NASCAR following the rousing success of the roval race last week at Charlotte.

Elliott bounded over the wall and high-fived Gordon, the driver he replaced in 2016, and shared a big hug with team owner Rick Hendrick. A year ago at Dover, Elliott coughed up the lead with two laps left to Kyle Busch, in what he called the most crushing defeat of his career.

“Glad you were here for this.”@chaseelliott shares a memorable moment with @JeffGordonWeb and Mr. H. #Di9 pic.twitter.com/F444H2Jenp

Elliott rubbed his head and leaned against his car, crestfallen as he replayed the final laps in his mind. Jimmie Johnson walked over to offer some encouragement and let Elliott vent.

It was one big celebration on Sunday.

“When he won the race at Watkins Glen, it was like the world was lifted off his shoulders,” Hendrick said.

Bill Elliott did not attend the race, but with more races like this one, it’s not hard to imagine son eventually eclipsing dad’s mark of one Cup championship.

“I think this only elevates his game,” Gordon said.

Elliott’s win means he can breathe a bit easier as the series shifts to treacherous Talladega, where anything can happen on the superspeedway. The top eight drivers after the next two races move on to the next round and Aric Almirola, Clint Bowyer, Kyle Larson and Alex Bowman are stuck below the cutoff with two races left in the round of 12.

“We’ve had so many opportunities and been so close and had the car to win and been in position and I don’t know, it just seems to not come through,” Almirola said.

SHR was in control with Kevin Harvick early and Almirola late.

Chase Elliott gets it done in Dover! This win locks him in for the NASCAR playoffs Round of 8. #Di9 pic.twitter.com/mdtVPdcuQI

Harvick led 286 laps and was on pace to sweep the Dover races until tire issues derailed his run and he finished sixth. Almirola, who led 64 laps late and had his second career Cup win in sight, was running sixth off a restart when he got loose and connected with Brad Keselowski. That triggered a multi-car wreck that collected championship contenders and brought out the red flag to force overtime.

“We were just lucky there and wound up dodging and weaving and being in the right place,” Harvick said. “I guess that makes up for the bad luck of losing the race with an absolute dominant car.”

Almirola had lost the lead when Bowyer wrecked. Elliott was third when he stayed out on yellow, and would lead the final 11 laps.

They got the points, the win ? and a championship hope still alive and well.

Here are other items of note from Dover.

Hendrick said there could be an announcement in the next month for Johnson’s new 2019 sponsor.

Lowe’s, which had been on the hood for all seven championships, said this year it was leaving the sport and Hendrick had yet to find another sponsor.

“It’s really hard when you have someone that’s so successful but they’ve been tied to one brand for a long time,” Hendrick said.

Johnson’s bid for a record eighth NASCAR Cup title ended last week when he was eliminated from the playoffs. His No. 48 Chevrolet was forced to the garage at Dover during the pace laps because of mechanical woes and he finished 36th.

Johnson, who holds the Dover record with 11 wins, was an early hit when he dropped off 12 kids’ bikes at Martin Truex Jr’s hauler as an apology of sorts for triggering a wreck last week at Charlotte that denied both drivers a shot at a win.

Elliott had 12-1 odds in the first-ever race where legalized sports betting happened at the track.

Dover International Speedway opened its on-site betting kiosk this weekend and became the only track that allowed sports gambling on its property. NASCAR does not prohibit its drivers or team members from betting on the race.

NASCAR President Steve Phelps said the series is set to implement guidelines in the rulebook on sports betting in 2019.

The series heads to Talladega where Keselowski is the defending race winner. Team Penske drivers Keselowski and Logano have combined to win five of the last seven races at Talladega.