A study gives us another reason to hate tailgaters 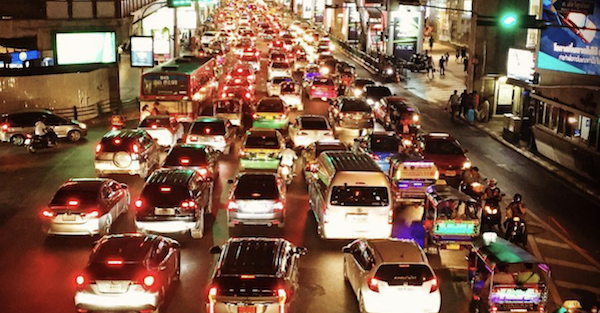 Researchers at MIT have found that tailgating is adding to our traffic problem in a big way. Tailgating, or the act of riding someone’s behind while driving, is not only dangerous but the study shows that if eliminated, we could arrive at our destination twice as fast.

The team?s work was partially inspired by how flocks of starling birds move in tandem.

?Birds have been doing this for centuries,? says Berthold Horn a professor at MIT. ? To program this behavior, you?d want to look at the birds all around you and not just the ones in front of you.?

Horn also added that cars need to be evenly spaced on the road:

?Our work shows that, if drivers all keep an equal distance between the cars on either side of them [front and back], such ?perturbations? would disappear as they travel down a line of traffic, rather than amplify to create a traffic jam…?

Here is a cool little graphic for those who need a visual aid.

What this shows is that a tailgater removes their ability to slow down gradually. If someone up ahead reduces speed, the person tailgating doesn’t have much time to react and has to slam on their brakes. This causes a chain reaction that forces everyone else to hit the hooks much harder than normal. This causes accidents and what they call a ?phantom traffic jam,? or a traffic slowdown that doesn?t seem to have an apparent cause.

The folks at MIT are not hopeful that this bad habit will just go away. Instead, they believe that proactive safety systems in new cars will help. Horn first proposed the concept of ?bilateral control” in 2013. This is a system that would work with adaptive cruise control and would set an equal distance between each car. Although some newer cars already have a similar feature included in adaptive cruise, a widespread adoption would be needed to have a major affect on traffic patterns. With new autonomous features like this one being proposed every year, it’s only a matter of time before the robots are just doing all the driving for us.