Wave goodbye to the Chevy SS 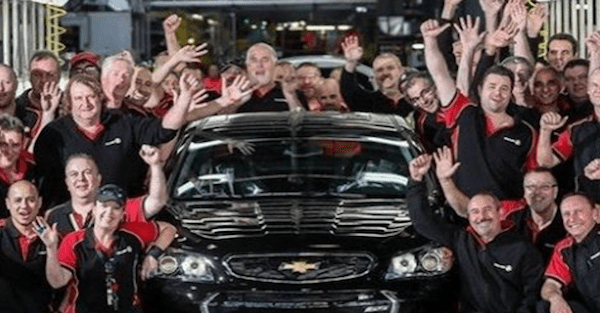 It’s a sad day in automotive history as yet another cool, rear-wheel drive, V8-powered GM car bites the dust. The often overlooked Chevy SS is officially done for and so is the Caprice Police Patrol Vehicle. The last SS is black, has a manual transmission and, at the owner’s request, has had all the line workers at the Australian Holden plant sign the inside of the hood.

Only 12,953 units sold since the SS was release in late 2013. The rebadged Australian Holden VF Commodore made it here due to an agreement GM had to reserve a certain amount of Holden cars for export. We in the states were lucky to have had another chance to own what was basically an updated Pontiac G8. GM chose not to advertise other than the SS being their official NASCAR entrant. That coupled with the $50,000 price tag, somewhat bland exterior styling and effectively no name since SS has long been known as a trim level really hurt sales.

Either way, the closing down of the plant would have ended the SS regardless of sales. So here we are, the end of an era. Or is it?  We have been here before with the Impala SS of the 90s and the G8 of the 2000s. If past performance is any indication of future results, we may see another somewhat affordable enthusiast approved GM rear drive sedan with push rods under the hood before too long.

If you can’t wait for GM to come to its senses, check out the used car market on the SS. These cars have taken a massive hit and a 2014 can be had for under 30k. With 415 horsepower, near magical magnetic ride control, a slew of modern convenience features and room for the kids, this car is a bargain.  Thank you depreciation Gods, so long Chevy SS.