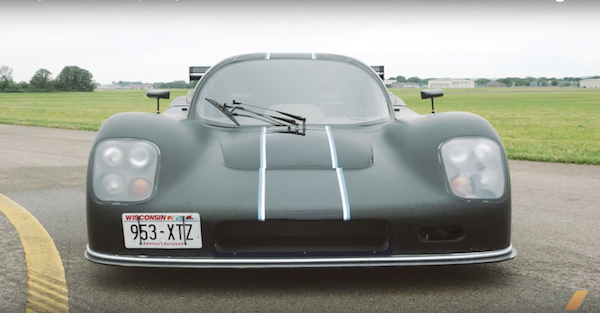 The Ultima GTR is a tiny Supercar that?s made in England, but is normally powered by a huge Chevy engine. The car is produced by the company Ultima Sports LTD, and was founded by Ted and Richard Marlow. The GTR has claimed many titles during its production run from 1999 to 2016. These records include fastest 0-60 mph time at 2.6 seconds, fastest road car in the quarter mile at 9.9 seconds at 143 mph, and still to this day, Ultima claims the GTR is the quickest Supercar in the World.

Records change all the time as competition is tough, but this car has been battling it out for years with the likes of the Ferrari Enzo and Bugatti Veyron SS. In this episode of The Drive, we see what it?s like to drive one of these Supercars with a 750 horsepower LS7.

Now this LS7 isn?t your standard pushrod LS7 with a massive cam and some head work. This particular engine was built by Mercury Racing, and features custom cylinder heads that transform this popular LS engine into a high revving, dual overhead cam monster. That?s right; this LS1 has four freaking cams and pulls strong all the way to 8,000 rpm. Did I mention the car weighs 2,200 lbs?

Host Will Sabel Courtney, is the lucky man behind the wheel and to say he was excited, would be the understatement of the century. The man is ecstatic even throwing out a curse word and laughing uncontrollably. His final high speed blast down a wide open Airstrip results in one of the doors almost flying open. It?s pretty crazy to say the least, so definitely check this one out.