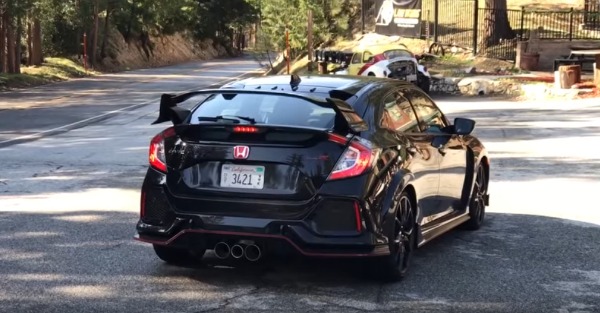 Fans of Honda have waited a long time to see this: A real, street legal Civic Type R on an American road. This video looks to show the final, production-ready form of the Type R. We knew this car was coming, but after a 20 year wait, we can’t help but get excited over seeing the real thing driving around in the states. Also, punch buggy.

In 1997, the first Civic Type R was made and, while the US market did get the Type R variants of the Integra, the highest trim Civic available here was the much milder Si. Absence truly makes the heart grow fonder, so Honda fans in the US grew to covet the Civic Type R more and more as each year went by without a true US-market version.

Standard features on this 2017 Civic Type R include a seven-inch touchscreen, navigation and a 12-speaker audio system. Under the hood, the turbocharged 2.0-liter inline-four engine kicks in 306 horsepower and 295 lb-ft of torque via a six-speed manual transmission.

While Honda fans who have waited this long are sure to be a little disappointed by the addition of a turbo, it is hard to scoff at 300+ horsepower in a Civic.

Related: The first Civic Type R to be sold in America is a departure from Hondas of old