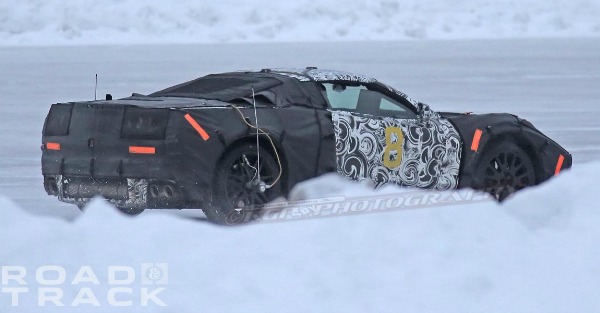 Keep your eye-rolls to yourself. It?s real! It?s really real! After countless concepts, teases, rumors and false starts, a mid-engine Corvette is finally on its way. We have a first solid look at what could be the new mid-engined machine. There are big expectations and high speculation for a car that has no official statements or release date announced.

Check out all of Road and Track?s spy shots here.

Here you go: More than 30 spy photos of the mid-engine Corvette prototype

With 64 years of history proclaiming the Corvette as America?s premier front engine, rear wheel drive sports car, ?Mid-engine? and ?Corvette? does not even sound right.

Why mess with perfection? Even though Chevy has been able to keep up with Europe?s finest, a mid-engined version of the Corvette has long been thought necessary to truly compete with the many companies that use the inherently balanced layout. Chevy has been pushing the performance of the front engine model to the edge of its limits, but has it hit a wall that only a mid-engine could break through? This would be the first major change to the Corvette model since 1955.

Could we end up seeing this as early as the 2019 model releases?

There is small speculated caveat that it could be branded a Cadillac. The mid-engine future car would go up against other models from competitors at Audi, Ferrari, Jaguar, Lamborghini and Porsche. Does the Cadillac brand fit more in the luxury, high-performance vehicle mix, more than Chevy Corvette? Some could argue, yes, Cadillac is a more traditional competitor with the foreign counterparts and would keep the Corvette true to its roots. The brand shift could also help justify the inevitable price increase for the new tooled construction.

For all intents and purposes this snub nosed, highly camouflaged car spied testing with other Corvettes in the snow is the embodiment of the long rumored future car.

Related: Now You Can Own Corvette’s 800 HP “Hellcat Slayer”