The Mercedes-AMG Project One hypercar is simply flabbergasting — and expensive 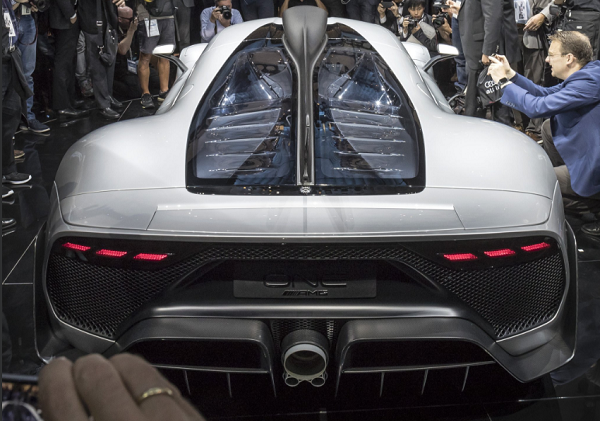 After teasing its new hypercar for months, the Mercedes-AMG Project One was finally put on display this past week at the Frankfurt Auto Show and this was one vehicle that lived up to the hype.

Based on the company’s championship-winning Formula One racecar, the Project One hypercar is powered by a 1.6-liter, turbocharged V6 engine along with four additional electric motors. Two of these motors are positioned on the front axles, while the other two are directly attached to the engine’s crankshaft and turbocharger.

This collection of engines gives the Mercedes-AMG Project One more than 1,000 horsepower, which helps the car accelerate from 0 to 124 mph in less than six seconds and reach a top speed of 217 mph. In comparison, the highly-praised Ferrari LaFerrari needs 6.4 seconds to hit 120 mph, according to tests performed by Road and Track.

Perhaps the most intriguing aspect regarding the Mercedes-AMG Project One is that it’s actually street legal.

That’s right, normal citizens are really allowed to buy this vehicle, but the bad news is that it costs approximately $2.7 million in U.S. currency. In addition, orders have already been placed for the 275 models planned for production, so your best shot at getting one will probably come at an auction in the future when somebody undoubtedly tries to make a profit on their Mercedes-AMG supercar.

Still, the Project One is one hypercar that collectors will be trying to acquire for years to come, despite its insane price tag.