The 2017 ZL1 has officially changed the narrative on Camaros 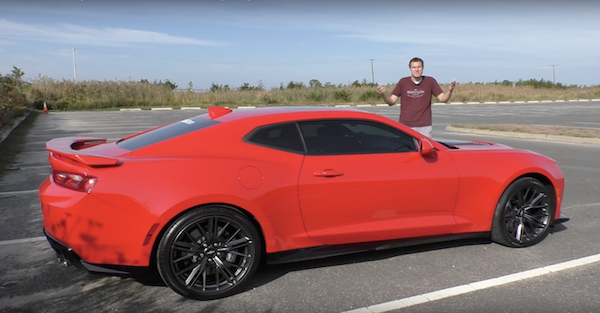 Long gone are the days of the Camaro automatically being associated with mullets, Joe Dirt, and 80s hair bands. The Camaro has quickly evolved into a lighter, more nimble, sophisticated car with plenty of grunt and few disappointments. When Chevy brought back the ZL1 in 2017, it officially laid to rest any worry that people would utter the words, “it’s just a Chevy though.”

The Camaro ZL1 comes with 650 horsepower and 650 pound-feet of torque. It runs a mid 11 second quarter mile, gets to 60 mph in the low three-second range and can do almost 200 mph. This kind of performance data normally belongs to an expensive European Exotic with a price tag closer to what most have in a 401k after 30 years, but you can buy a new ZL1 for less than 70 grand.

In this video, Mr. Doug DeMuro takes us on a tour of the Camaro ZL1. He covers all its weird quirks and features and then takes it out for a test drive to get a feel of some good ole American horsepower. He then gives it a Doug Score, which is basically a report card for cars. The ZL1 scored a 65 out of 100, but most importantly, it beat out the Mustang GT350R and that’s all that really matters.

Related: This custom Camaro is an automotive mullet