You can buy an amazing motorhome once owned by a racing legend, but it’ll cost you 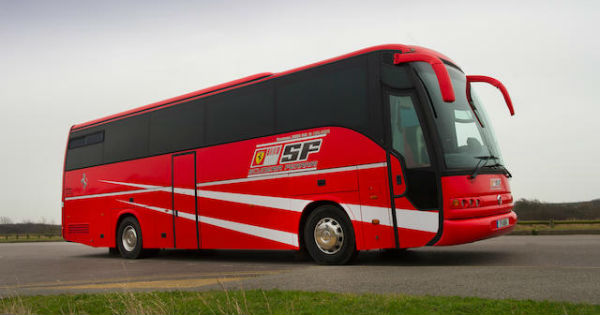 Next month will bring a new opportunity to F1 fans who long to own a piece of the sport’s history, especially if that souvenir is on wheels.

On Feb. 8, Bonhams’s Les Grandes Marques du Monde au Grand Palais auction will feature the tour bus used by Ferrari to ferry Michael Schumacher and his teammate Rubens Barrichello from race to race, according to DriveSparks.com.

The prized coach is expected to pull in any amount from $177,000 to $213,000 on the auction block, making it a bit more expensive that your normal race day souvenir stand trinket. The bus is being sold by Bonhams.

The exterior of the bus is still its original Ferrari red, coplete with the brand’s iconic horse badges. However, the interior has been completely reworked since its racing days.

After it was retired from service by Ferrari, a new owner bought the behemoth and breathed new life into its interior, with brand new electrical work, ceramic tiled bathroom, and a Bose sound system.