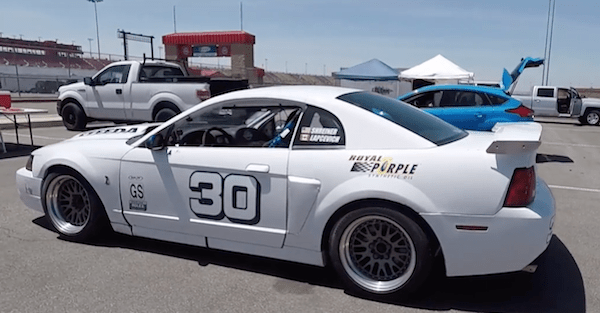 TheSmokingTire/YouTube
When Matt Farah from TheSmokingTire reviews a car, you know two things are going down. First, the car is going to get a thorough beating. Second, he?s not going to hold back any negative comments about the car, or in this case both the car and the track.

This time Matt is driving a very rare Ford Mustang Cobra – just one of three built. It?s not the most powerful or fastest Mustang in the world, but instead is a purpose built car by Steeda to compete in the Sportscar Vintage Racing Association. This 2002 Mustang Cobra was originally fitting with the Terminator Supercharged 4.6 V8, but was then converted to a naturally aspirated 5.0 stroker per class requirements. Still, the car produces 450 horsepower and is mated to a manual transmission. This car was never street legal and has lived its entire life on a race track wearing slicks, big Wildwood brakes and a stripped out interior complete with roll cage, racing seats and harnesses.

Where did they even find this car?

This car was bought off of Craigslist for $15,000. If you weren?t feeling old enough today, it?s fun to point out that a 2002 model year car is eligible to race in this ?Vintage? racing class. Not sure how 2002 is considered Vintage yet but, sure. Ford never made a 2002 Cobra for the states so this car must have either been made for another country, not a 2002 model year or just not a true Cobra.

Matt?s plan was to do 3 laps with the first two being test runs to get acquainted with the car. He is told he is the only one on the track, but then quickly realizes that?s not the case at all and almost immediately passes a pace truck. It goes downhill from there. After the second spotting he says:

?Jesus that?s a f**king pace truck on the track, this isn?t good.  I didn?t see that guy until the very last minute so that?s extra sketchy.  Lets hope there?s nothing else on the track they haven?t warned me about, other cars, deer, children.?

Aside from constantly running into a pace truck putzing around the track, Matt had to dodge cones that seemed to just be left in the middle of the track.  Also, the car itself was really not ready for this test drive as it kept breaking up around 5,000-6,000 rpm. Adding to his frustration were some not so impressive areas of the car, including: The lack of a speedo, the seat track moving back and forth, no steering feel, the weird spacing of the clutch pedal and a sketchy vibration during the run.

What does it feel like to ride in a Ford Mustang Cobra?

The best of the worst in this video is how Matt describes the ride quality. Remember this is a race car built for superior handling around tight corners. Matt says the ride quality is ?Beautiful? and not too stiff. That?s not necessarily a compliment for this type of car.

Advertisement
Related: Matt Farah didn’t know what he signed up for with this sketchy Camaro Z/28