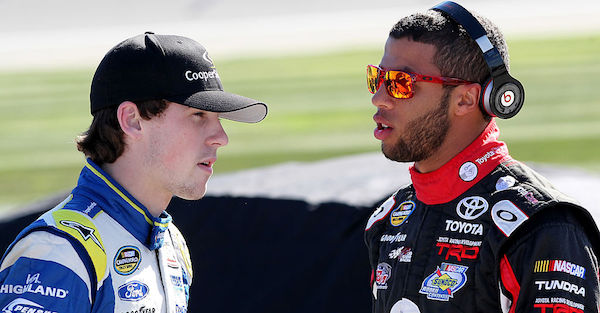 When Bubba Wallace makes his Monster Energy NASCAR Cup Series debut on Sunday at Pocono, he will be driving the iconic No. 43 car that was once driven by Richard Petty.

Wallace’s good friend, Ryan Blaney, will be driving the No. 21 car alongside Wallace. Blaney even texted Wallace about the two getting a picture with their iconic cars.

.@BubbaWallace says @Blaney woke him up this morning. Wants to take their pictures in front of the 2 most iconic cars in #NASCAR

Related: This driver will become only the fourth African-American NASCAR driver since 1961

“It?s funny, Blaney texted me this morning, actually woke me up this morning, he wants a picture this weekend,” Wallace said. “I was like, OK. He was like, ‘We?re driving the two most iconic cars in the sport this weekend. We definitely have to capitalize on that.'”

Wallace is only the fourth African-American driver to appear in the NASCAR Cup Series since 1961, so his debut is very important for the sport for a number of reasons.

The added bonus of him racing in the No. 43 car while his good friend in Blaney will be in the No. 21 car adds another fascinating level to Sunday’s race.

“That?s huge,” Wallace said. “That?s awesome for me to get my first start driving the No. 43 for Richard Petty and everybody at RPM. Then the other side of it is [being] the first African-American since 2006. That?s a lot of history behind it.”

Wallace and Blaney are two of the top young drivers in the Cup Series, along with Kyle Larson, Chase Elliott and Erik Jones.

A win for either Wallace or Blaney?or even just a top-10 finish?would be special for NASCAR. The race is basically an audition for Wallace to prove he belongs in the Cup Series, and a great race at Pocono would be big for his career.