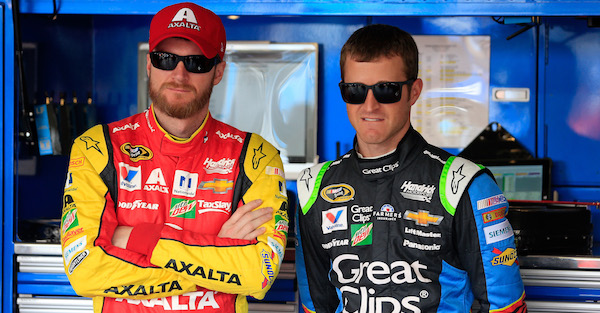 Kasey Kahne and Matt DiBenedetto aren’t in the playoffs competing for a championship, but the two drivers can still celebrate career milestones this weekend at Kansas Speedway.

Kahne was the Rookie of the Year in the Cup Series in 2004, and he has won 18 races throughout his career. His latest win came this season as he won the Brickyard 400 and qualified for the playoffs.

He has 92 top fives, 176 top 10s and 27 poles in his career. Kahne is competing in his last five races for Hendrick Motorsports before moving to Leavine Family Racing for the 2018 season.

Related: The weather could wreak havoc with the races at Kansas this weekend

DiBenedetto doesn’t have any wins in the Cup Series, but he has improved this season in the No. 32 Go Fas Racing Ford.

He said in a press release that he’s looking forward to racing at Kansas.

“I really enjoy racing at Kansas Speedway,” DiBenedetto said. “Our mile-and-a-half program has been very strong this year and (Crew chief) Gene (Nead) has been giving me fast race cars to compete with. We qualified in the second-round here at Kansas earlier in the season, so that gives us a lot of hope.

“I like the racing at Kansas because you can move around a lot groove-wise and find a line that works with the balance of your race car. I?m usually one of the first people to move up into the high-groove and that seems to help find us some speed. If we can get a balance on the race car like we had in the spring, I know we?ll be fast and competitive.”

Other drivers have hit similar milestones this year. Dale Earnhardt Jr., Kevin Harvick and Kurt Busch made his 600th career start earlier this year, while Brad Keselowski just won at Talladega in his 300th career start.