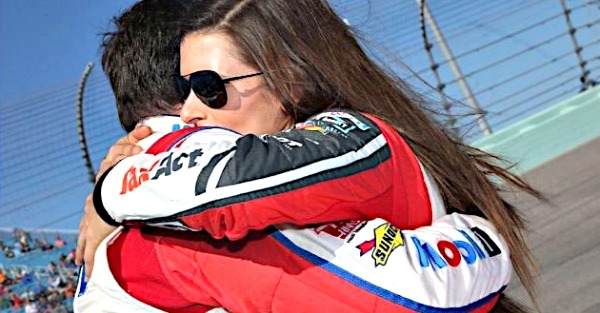 Stewart-Haas racing has been a staunch supporter of Danica Patrick. Co-owner Gene Haas has raved about her marketing abilities, so it’s no surprise that Tony Stewart would weigh in with a heart-felt statement of his own. That’s what he did Wednesday morning on Facebook:

“I’ve always been a believer in Danica’s ability as a racecar driver and that continues to be the case. She’s one of the most fearless people I’ve ever met. She has never backed down from a challenge. In fact, she’s sought out new challenges throughout her career, and that’s what brought her to NASCAR and Stewart-Haas Racing.

“Making the jump from INDYCAR to NASCAR is not easy, yet she had the courage to do so and put up better numbers than a lot of other drivers who have tried to make that same transition. I’m proud of how hard Danica has worked during her time at Stewart-Haas Racing, and she continues to work hard.

“My support for Danica is unwavering. We’re going to end this season strong and make the most of these last 10 races.”

Patrick, the trailblazing driver who had a number of “firsts,” announced Tuesday she was leaving Stewart-Haas Racing:

“It has been my honor to drive for Tony Stewart, Gene Haas and everyone at Stewart-Haas Racing for the past six seasons. Together we earned a Daytona 500 pole, seven top-10 finishes and we also had some exciting racing along the way. My time driving for them, however, has come to an end due to a new sponsorship arrangement in 2018.  Sponsorship plays a vital role in our sport, and I have been very fortunate over the course of my career, but this year threw us for a curve. Our amazing partners, such as Aspen Dental and Code 3, stepped up in a big way on short notice this year and I am incredibly grateful.

“I wish SHR the best of luck with their new sponsorship and driver. Thanks for the memories.  Right now, my focus is on the remainder of the 2017 season and finishing the year strong.  I have the utmost faith in myself and those around me, and feel confident about my future.”

Patrick was the first and only woman’s to earn a victory in an IndyCar series race (the Japan 300); the first woman to win the pole at the Daytona 500 (2013) and her third-place finish in the 2009 Indy 500 was the highest ever for a woman.

On the track, she had seven top 10 finishes in the XFfinity series and seven top-10s in the Cup series

Like many drivers, she suffered sponsorship issues and she doesn’t have a sponsor for the No. 10 Ford Fusion. She’s also acknowledged that, without a sponsor, she wouldn’t race next year.

Now, she’s free to go in another direction, whether that be looking for another ride or going into business. Her widely followed Instagram and Twitter accounts are filled with tales of yoga, her diet, and her new clothing line — and she has a massive following. Not only that, she’s just been featured in Time Magazine’s special features, Firsts, which is looking at woman who have changed the world.

Danica Patrick has made a career out of being the first. She talks about her journey on @TIME's Firsts project https://t.co/jHnBEN78nY pic.twitter.com/EFUZW8VFOO

She has certainly done that. And now, at just 35-years-old, she can go off and do whatever she wants.