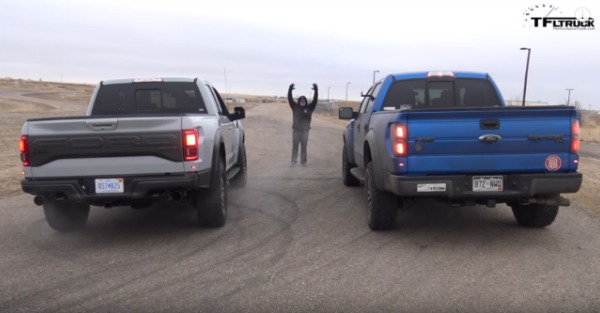 Like the new Ford GT, the 2017 Raptor ditched its predecessor’s old fashioned V8 for an Ecoboost v6. Ford fans were not happy about either, but Ford seems determined to try to do more with fewer cylinders. The new Ford GT has proved itself racing but the Raptor, while on paper is an improvement over the old version with around 40 more hp, hasn’t had many chances to show what it can do.

These guys wanted to see if all the numbers add up to a real world win for the Ecoboost Raptor. They do. Despite sacrificing the beautiful sound of a big V8, the 2017 Raptor blew away the old one in each race. While drag racing is not the forte of these off-roading dynamos, it is encouraging to new Raptor buyers that they aren’t sacrificing any speed with the loss of two cylinders.