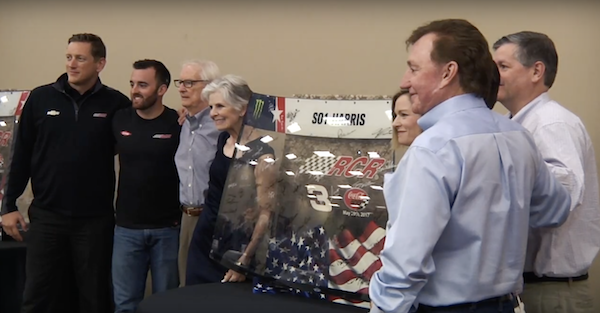 This year’s Coca-Cola 600 winner Austin Dillon proudly wore a banner on his windshield honoring Navy Seal Joshua T. Harris. The 600 miles of remembrance program is one of the most patriotic events in profession sports, as every car in the race wears a fallen service members name.

After the win, the Richard Childress Racing Team presented the windshields from Austin’s car and other team members’ cars to the families of fallen service members.

Joshua was a Navy SEAL who worked his way up to the most most elite counter-terrorism unit, SEAL Team 6. Joshua was highly decorated, earning a purple heart and three bronze Bronze stars. He lost his life in 2008 in Afghanistan after being part of 100 missions as a SEAL.

The rustic American Flag paint scheme on Austin’s number 3 car was inspired by a 325 lbs whiskey barrel flag that the Harris family presented to Richard Childress. The two families both have strong ties to the North Carolina community and had met at a race shop in NC a few years ago and have stayed close ever since.

Austin expressed his gratitude to the family saying:
“To be able to win a race with an angel like him on board, I think it just takes it to another level.  They’re a part of the team, they’re a part of the family, they’re excited and it was good to see his mom just so happy to know that Josh had something to do with this win.”

Congrats Austin and the Childress team. Thanks to all the service men and woman especially those who have paid the ultimate price.

Related: Austin Dillon put in hard work and took some hard hits to get where he is now