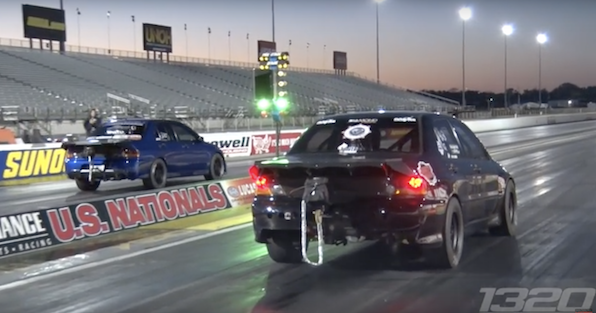 One of the most embarrassing things you can do at the track is stall out off the line. Just about the only thing that makes it ok is if the car you’re racing does the same. In this video posted by 1320video, we see a grudge race for $1000 between two serious fast looking Evos. We don’t know exactly how fast because, well they both stalled out on the line but with 1,000 horsepower and all-wheel drive you can bet these things roll out.

Immediately after the black Evo stalls, the blue one follows suit.  You may have thought these guys are both done for and will just restart the race. Quite the opposite, as we see the blue car take off very slowly.  Right when he regains power and thinks he has it won, the black car takes off and chases him down. In the end, the black Evo takes home the cash prize.

This had to have been the slowest $1000 race in the world as both of the cars ran over 20 seconds in the quarter mile.  Realistically, you could have put a 1980’s minivan up against either car and walked away one grand richer.  Imagine what the odds would have been.

Related: Chevy Camaro gets literally destroyed in a grudge race