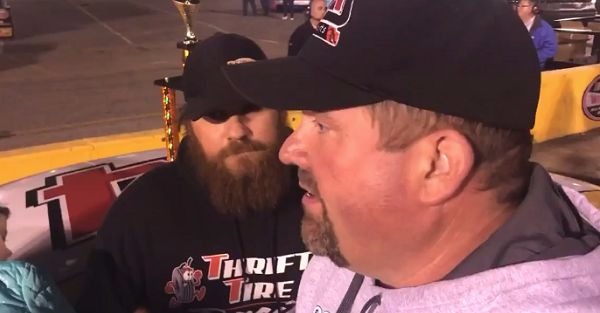 That’s what some racing fans might have thought after hearing about the controversial finish that happened in the 17th Thanksgiving Classic recently held at Southern National Motorsport Park.

On lap 175 of the final Late Model Stock race of the season, the caution flag waved after Brenden Queen and Devin Dodson crashed in turn 4, which required a red flag to temporarily stop the race. Track officials determined that Matt McCall was leading when the caution flag was displayed, but Justin Johnson’s crew disputed this claim. Johnson’s team even showed tack owner Mike Diaz a race monitor, which they said proved Johnson was ahead of McCall, according to Short Track Scene.

While McCall ended up winning the race over Johnson by 1.502 seconds, Diaz and track officials met after the race to determine whether they missed the call that led to McCall taking the lead. After inspecting both cars, it was determined that a transponder was incorrectly placed on McCall’s car and this could have led to incorrect scoring, according to Race 22.

Before Diaz called Justin Johnson over, he says the issue is that McCall's transponder was in an advantageous position and that's the only reason he was given the lead.

"Matt never had the lead." #ThanksgivingClassic

However, Diaz made the decision that McCall would still be the official race winner, essentially saying that Johnson had time to take back the lead in the last 20 laps, but failed to accomplish that task.

It shouldn’t surprise anyone the media had plenty of questions for Diaz once he finally showed up inside the trackside press box. While Diaz was clearly emotional about the tough decision he was forced to make, he took the time to carefully explain his reasoning.

?So I, as a track owner, am not going to make out well in this, Diaz said, according to STS. “Without putting my personal opinions into it, I know that this was not the right decision for some, and it was not the right decision for others. It was a mistake by my race track officials to not identify the position of the transponder. But that was a transponder that I don?t think won the race.

This decision didn’t sit well with Johnson. He criticized track officials during a post-race interview before taking the time to thank his team for putting him in position to win, even though things didn’t ultimately go their way.