Stewart-Haas preparing from some upheaval behind the scenes 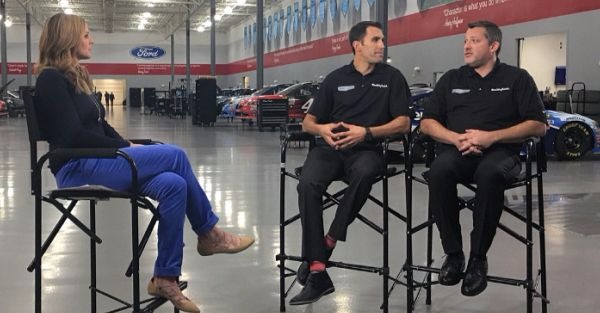 Tony Stewart and Greg Zipadelli may have won two championships as a driver-crew chief combination in the early 2000s, but that doesn’t mean they agree on everything.

For example, when Stewart-Hass Racing formally announced that Aric Almirola would be driving the No. 10 car in 2018, Stewart told everyone in attendance that Billy Scott and his crew would stay with the No. 10 when Almirola takes over the car  from its incumbent driver Danica Patrick.

However, the competition director for Stewart-Haas Racing, Greg Zipadelli, wasn’t as willing to commit to the Almirola-Scott pairing, at least not yet.

“We haven’t made those decisions yet,” Zipadelli said, according to Motorsport.com. “That was kind of the plan, but we’re looking at everything right now. How do we take the people that are in house? How do we move them around? How do we make Stewart-Haas stronger?

“In all honesty, Billy and that group may end up there. Then they may end up somewhere else. I’m non-committal to that. We’re looking at how we mix and match personalities and try to motivate everybody and get everybody to the level that Rodney (Childers) and Kevin (Harvick) are. It’s about building that relationship, building that trust and that team. And that’s what we need to do with the rest of those guys.”

One of the reasons why Zipadelli is hesitating to finalize these decisions could be due to Kurt Busch’s contract situation at SHR. While both the driver and team have made it known they’d like to extend the partnership, the primary sponsor of the No. 41 Ford, Monster Energy, has yet to decided whether it will continue its relationship with the team after the 2017 season.

Furthermore, the combination of Clint Bowyer and Mike Bugawericz didn’t exactly click this season, with the two-exchanging words after the Talladega race and managing only 13 top-10s finishes this year. But, if there’s anybody who can create the right driver-crew chief chemistry at SHR, then it’s Greg Zipadelli.

He did win two NASCAR championships with the opinionated Stewart driving for him.