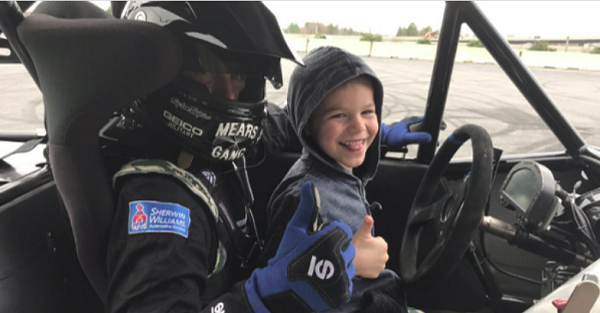 Casey Mears grew up watching his father, Roger, race trucks and now he’s got the opportunity to follow in his dad’s footsteps.

On Dec. 15, Mears will make his debut in the Stadium SUPER Trucks series at Lake Elsinore Diamond Stadium. If you’re not familiar with this racing series, it features off-road trucks that are meant to resemble their scaled-down Traxxas radio-control-car counterparts and they can be raced on virtually any surface, including small dirt tracks and circuits used by the Verizon Indy Car series. What’s more, SST is owned by former NASCAR driver Robby Gordon.

While Gordon hasn’t driven in the Cup Series since 2012, he did race in the Mickey Thompson Stadium Championship with Mears’ father before the series went bankrupt in 1996. Having just finished an abbreviated season in the XFINITY Series, Mears is eager to get back to the same racing he grew up watching his father compete in.

“It’s fun and I’m excited about it, because it’s kind of what my dad used to do,” Mears said in an interview with Motorsport.com. “The trucks are very similar, except most of the trucks back then were V6’s and these are V8’s. But the size of them, the way they’re built, the style of the racing and the stuff they do remind me a lot of when my dad was racing. And it’s been a lot of fun so far.

“What is cool about it to me is I was about 14, 15 years old when the Mickey Thompson thing fell apart—when they were doing the whole stadium thing. I was in line and actually close to doing some truck stuff, then the series fell apart. I got to test my dad’s truck, do some super lights, buggy class, that sort of thing. So it’s really cool for me to do something like this that my dad did so many years ago.”

As for his NASCAR career, Mears is keeping his options open. Having previously driven for Chip Ganssi, Rick Hendrick, Richard Childress, and Germain, the 39-year-old Mears disclosed that he’d come back for the right situation.

“I had a great opportunity at Germain for five or six years, and we really built it into something that was halfway competitive where it used to be fun at various races. But if I’m going to be in Xfinity, I want to be with a good program where I’m able to go out and win races, “Mears said. “I wouldn’t mind racing Cup, run like superspeedways or some road courses, but outside of getting an opportunity to compete, I don’t think I want to run a full season with someone mediocre.”