Charlotte might not be the only Roval course in NASCAR 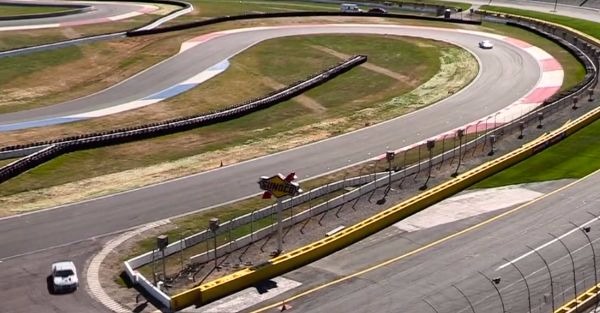 You would think that NASCAR might want to wait and see if next year’s Roval race at Charlotte is a success before trying the concept in other places.

Speedway Motor Corporation, the companies that owns and operates most of the tracks NASCAR uses for its races, says it already looking at other Roval events for NASCAR.

“This pioneering 18-turn, 2.4-mile ?Roval’ course is another innovative step by SMI, and may set the stage for similar configured racing at other motorsport facilities,” O. Bruton Smith, the Executive Chairman of Speedway Motorsports, said in the company’s Q3 financial results.

The Roval course is essentially a mix of the traditional oval track and an infield road course. In its current configuration, the track is 2.42-miles long and features 18 turns.

There are still some details to work out. CMS would like the Bank of America 500 will be 500 kilometers in length, meaning that drivers will navigate around the track 130 times, according to NBC Sports.

However, NASCAR quickly released a statement declaring the official distance for next year’s event has yet to be finalized.

“This week?s test provided valuable data that will be part of the equation in determining the distance for next fall?s race. We will continue working closely with our partners to develop the best event for fans and competitors alike.”

The tests referred to in the statement were conducted by Martin Truex Jr., Paul Menard, Jamie McMurray, and former Cup Series champ Kurt Busch. These drivers represented all three makes currently involved in NASCAR as McMurray and Paul Menard both pilot Chevrolets, while Busch drives a Ford and Truex Jr. races a Toyota.

It almost goes without saying these drivers had some interesting comments regarding the new Roval.

“There’s a lot of exciting parts of the track,” said Truex Jr. “It’s very narrow. It’s very rough. There’s a lot of swells and whoop-de-doos and craziness going on. It’s a little intimidating. There’s a lot of spots that made me nervous yesterday. I’m getting used to them now. But we need to look at walls and tire barriers, stuff like that.”

In contrast, Busch’s comments focused on the tracks’ structure and how slowly the cars needed to go in order to navigate the chicanes featured on the track.

Cup Series drivers will get the chance to compete at the Roval during the NASCAR playoffs in 2018. It’s scheduled to be the first playoff elimination race next year.

That could be a scary thought for some teams since the track’s final configuration and distance have yet to be officially determined.

And, they may end up running other Rovals, based on SMI’s comments.