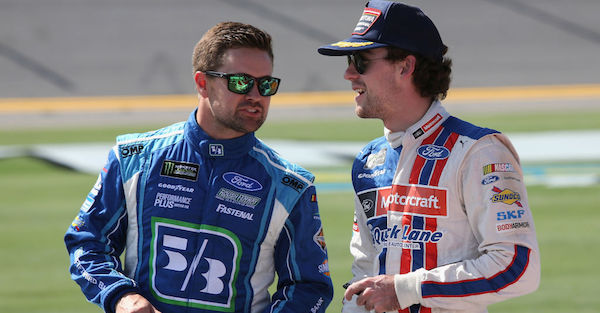 Well, this starts things off it a bad position.

Ryan Blaney, who is already on the playoff bubble, failed his postqualifying race inspection and will start  in the last row, according to ESPN’s Bob Pockrass.

This is bad news for Blaney, who, entering Sunday’s race at Kansas Speedway, is seventh in the points and firmly on the bubble to advance to the Round of 8.

He certainly doesn’t have any breathing room heading into the Sunday afternoon race because he leads Jimmie Johnson by only two points, and he’s nine points ahead of ninth-place Kyle Busch.

In an interview with Racer.com, Blaney was asked about being an underdog, and he said said he actually likes that role.

“Yeah, I’ve heard people call us underdogs and things like that, and that doesn’t really bother me at all,” Blaney said. “I kind of like being that person. There isn’t a lot of hype around you; you just have to go do your absolute best. When you’re kind of a small team and you kind of overachieve, that says a lot. I like that. I like being the underdog. It makes for a better story, for sure, if you can accomplish big things.”

Related: NASCAR pit crews look like they are stuck in molasses compared to these guys

Blaney said he has confidence heading into Kansas, and it’s a track he’s had success at in the past. He said he feels like he’s in a good spot going into the weekend, and he’s had two top five finishes in four races at Kansas.

The point differential between Blaney, Johnson and Busch is slim, and the final two spots could be decided by stage points. If Blaney can secure another top five finish, he will certainly increase his chances of advancing to the next round.

Blaney won the first race of his career earlier this season, and he’s one of the most talented young drivers in the sport. The season has already been a success for him, but advancing another round would be a remarkable accomplishment for the 23-year-old.