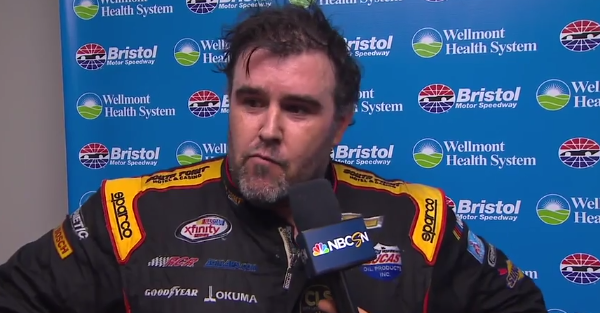 If you’re a fan of NASCAR, then you know many drivers don’t mind trading a little paint at short tracks like at Martinsville and Bristol, where the speeds are low enough that no one’s likely to be seriously injured in a crash, but it’s a whole other story at high-speed tracks like Texas Motor Speedway.

While attempting to pass a slow car on lap 105, two Camaros piloted by veteran drivers Ross Chastain and Brendan Gaughan made contact with Chastain narrowly avoiding spinning out. However, the two drivers met up to discuss things after the race and that’s when a fight broke out, according to NASCAR.com.

The reported scuffle happened behind pit road where the non-playoff drivers park their stock cars. According to Chastain, he was confronted by Gaughan and his crew members before he could get totally out of his car.

While the fight was not caught on film, photographer Daylon Barr did capture the very end of the fracas.

This is all I got on video. Light wouldn’t come on and it was just about over. pic.twitter.com/rjpNGDeC38

?I was just getting out of the car and was sitting on the door and was getting ready to swing my legs out and there he was,?? Chastain said, according to NBC Sports. ?He just came right at me with his guys. There were just swings from that point on.??

Both drivers were summoned to the NASCAR hauler following the dispute and while Chastain choose to discuss the event with reporters, Gaughan took NASCAR’s advice and declined to talk about the fight with the media, but he did share his thoughts about today’s Cup Series race.

?Getting ready for a radio show tomorrow morning,? Gaughan said, according to Motorsport.com. ?If anyone wants to know my thoughts, Chase Elliott is my lock for the week tomorrow and my value pick looks like it?s going to be Ty Dillon.”

Neither driver was penalized by NASCAR, but a spokesman said this could after reviewing the  incident.

Ross Chastain says he is ok after a scuffle with Brendan Gaughan and crew. He has a little bit of a shiner. pic.twitter.com/uZNbeJdOTY

There will probably be more on this.