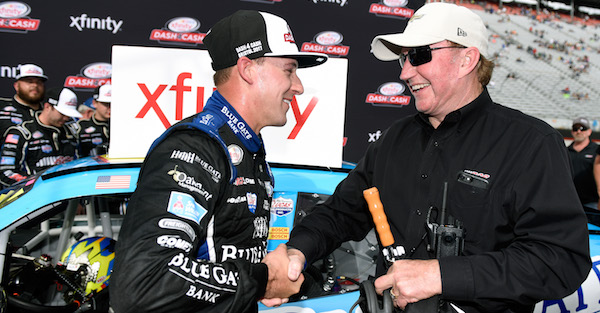 The team announced that South Point Hotel & Casino will return as the primary sponsor for the No. 21 car for Daniel Hemric in the Xfinity Series for 2018. This will be the seventh straight year that South Point will team up with Richard Childress Racing.

Finally get to share this!! 😀😀
The Gaughan family & @southpointlv has such a deep, rich legacy in motorsports. I’m just the lucky guy that gets to keep that legacy going next year! Thank you Thank you Thank you!! 👍 https://t.co/NcmbKR0B6X

Related: Martin Truex Jr. lets one of his major sponsors feel the burn ? in a good way

“The South Point Hotel & Casino is excited to be continuing our partnership with Richard Childress Racing in the 2018 season,” Gaughan said via NASCAR.com. “Watching Brendan carry our colors these past couple of years on the track and into Victory Lane has been a lot fun. We?re looking forward to continuing the accomplishments during this coming season with Daniel Hemric. Daniel is a great driver and we know he will represent the South Point well both on and off the track.

South Point will be the primary sponsor for the car for all 33 Xfinity races next season.

“RCR and the Gaughan Family have had a special relationship that we?re thrilled to be able to continue,” Childress said. “As with RCR, the South Point Hotel and Casino has a rich history in stock car racing and it is a part of our heritage. Daniel made it to the Xfinity Series Championship 4 this past season and we look forward to another season of watching him compete for the championship.”

Hemric made the Championship 4 in 2017, and he will look to build on that success during his 2018 campaign.