Phoenix was a wreck-filled mess and afterwards, one driver threatens another 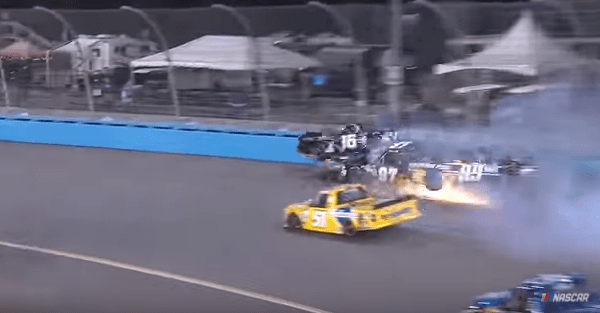 Wrecks. That was the word of the day at Phoenix, and they knocked one driver out of playoff contention and infuriated another to the point that he made a direct threat to a rival.

Christopher Bell and Noah Gragson — The Kyle Busch Motorsports teammates — wrecked with seven laps left as their were racing side-by-side.

Ryan Truex got caught in a nasty three-car wreck.

But the most contentious wreck was between Ben Rhodes and Austin Cindric.

Matt Crafton was caught in that wreck, and he was furious afterwards, and he said Cindric’s No. 19 “better not finish” Homestead. Cindric is in the final four with Phoenix winner Johnny Sauter, Crafton and Christopher Bell.

Rhodes, in comments to FSW1, said: ?(Cindric) put me in a bad place and I was trying to do everything I could to keep the spot, but once we filed into Turn 1, we were all going to wreck. I don?t know if that was the right move on his part. ? It looked like a desperation move. I guess if I was in his position, I can?t blame him, but it?s not the move I would have liked to see. ? Just driving over his head, I guess.?