Who says racing is over? Kyle Busch gets a win in Florida. 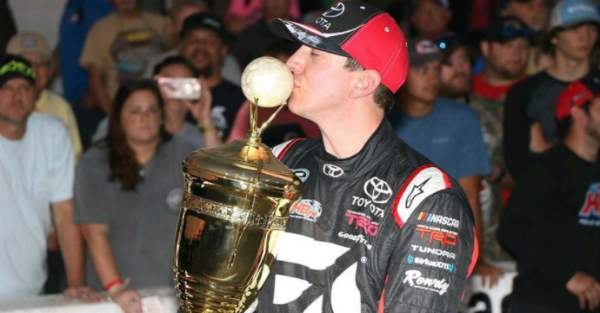 It’s funny how a few days can totally change someone’s outlook on a situation.

Kyle Busch pulled ahead with 17 laps to go and won the Snowball Derby at Five Flags Raceway and never looked back. It was Busch’s second win in the Super Late Model race, which he also won back in 2009, according to NBC Sports.

After his qualifying run on Friday at the Snowball Derby, Busch wasn’t to pleased with the outcome. He was set to start 15th in the race and was less than thrilled about it.

The 50th running of the annual race in Pensacola took place on Sunday with 56 participants. All things considered, 15th is still towards the top of 56, but nonetheless it wasn’t what Busch was hoping for.

RELATED: Kyle Busch is running in the Snowball Derby, and now, he’s unhappy about one aspect

“Just tried to persevere and save and work my way to those guys and finally be able to get my way around them,” Busch added. “I wasn’t sure that once I got there I’d have enough to get by them, but they just kind of kept falling off and mine just plateaued and kind of stayed.”

Busch beat out Jeff Choquette, Bubba Pollard, Harrison Burton, Cassius Clark, and many more en route to his victory. Croquette and Pollard led 221 laps of the 300-lap race on the half-mile track.