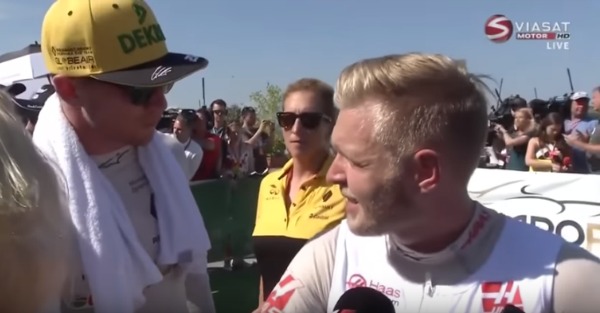 On Sunday, following a Formula 1 race in Hungary, driver Romain Grosjean took a shot at NASCAR when he said:

“We want racing, but we don’t want wheel-banging, we’re not in NASCAR.”

His remarks came following a crash between Nico Hulkenberg and rival Kevin Magnussen, in which Magnussen pushed Hulkenberg into the grass as he tried to pass.

Hulbenberg, after the race, tore in Magnussen during a post-race television interview, as per Formula1.com:

“I congratulated him for being the most unsporting driver of the whole grid once again,” Hulbenberg said.  “When it comes to racing, he’s just nasty. Hard defending is fine but when he does this, it’s just ruthless and sending people into the wall. What he did there, opening up the steering, making me run wide, it’s just being an (expletive), basically.”

Magnussen had a profane message of his own:

Clearly, there’s bad blood brewing, and that can translate into  problems on the track.