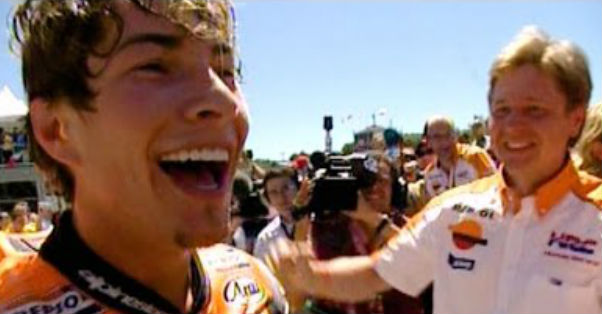 Back in May, Nicky Hayden, the 35 year old former Moto GP champion, died after he was struck by a car while riding his bicycle in Italy.

His death stunned the racing world, and tributes quickly poured it (below).

Painter Julian Clavijo has completed a mural that honors Hayden, and it’s striking.

Always in our hearts 🇺🇸 Our tribute to @NickyHayden by Julian Clavijo. See it at Urban Alley today #AustralianGP #RideOnKentuckyKid pic.twitter.com/xdhCYhMJiW

Autosport says that initial reports said that Hayden had suffered a cerebral edema and several bone fractures in the wreck, and he never recovered.

Hayden, nicknamed “The Kentucky Kid,” won the 2006 MotoGP championship with Repsol Honda. He most recently raced in the World Superbike series.

Here are some of the tributes that poured in at the time.

This has always been my favorite image of Nicky Hayden. Godspeed, Kentucky Kid. pic.twitter.com/xeiPQUlJm1

Saddened by the news that Nicky Hayden has passed. Honored to have met him. My heart goes out to his family and friends across the world.

Nicky Hayden – the backyard racer who conquered the world.

Read our profile of "the nicest guy in the paddock".https://t.co/OfwSefNACZ pic.twitter.com/bA9kRtOEIb