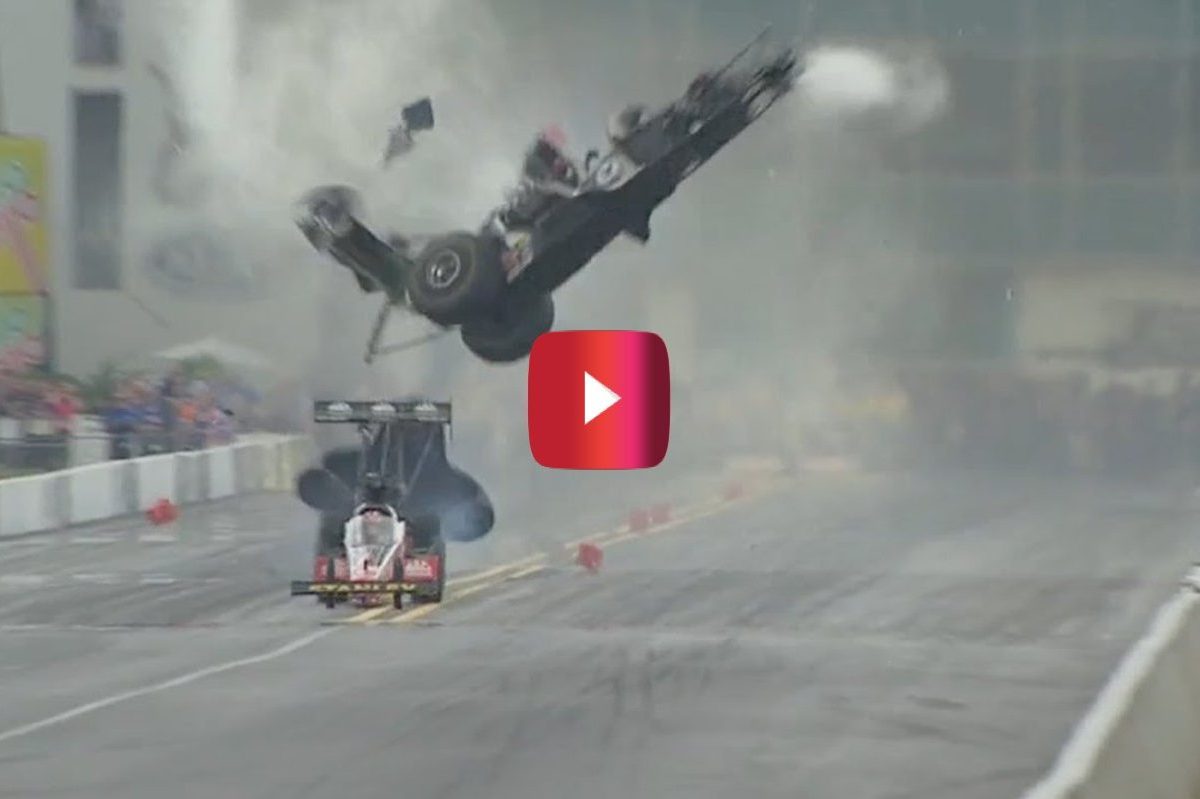 There’s nothing quite like watching a Top Fuel dragster reach over 300 mph in a matter of seconds. This is the awe-inspiring intensity brought to you by the sport of NHRA drag racing.

With that in mind, it’s not until a major wreck occurs that you truly realize how dangerous the sport can be. These drag racers put their lives on the line every single time they compete.

Take Scott Kalitta’s fatal crash back in 2008, for example. The horrific accident on the Old Bridge Township drag strip changed the sport’s safety importance completely. Since then, a variety of safety equipment and practices have been added to competition.

Despite all the important changes that have been made to the motorsport over the years, each season is still filled with wild accidents and collisions. Here, we’ll looks at seven of the most intense crashes from the past several years.

In 2020, Leah Pruett was competing in the second round of eliminations at the Mopar Express Lane NHRA Midwest Nationals when she experienced a major structural failure. As the NHRA driver made her way down the track, her dragster’s frame bent, causing the front half of her car to completely disintegrate. She went airborne for a moments, and finally came to a stop near the left lane wall.

Amazingly, she exited the car under her own power and sustained no major injury thanks to the car’s safety equipment.

2012 world champion Antron Brown was competing in the second round of eliminations at Pomona Winter Nationals in 2013 when his nitro car spontaneously combusted into a fireball. Immediately, the car flipped onto its side, crashed into a wall, skid past the finish line of the dragway, and finally came to a stop in the sand. Emergency crews were quick to jump into action and put out the flames.

Even though it was an intense drag racing crash, Brown miraculously managed to escape the car under his own power.

A break in traction can be severe in drag racing. Brittany Force experienced just that during the Lucas Oil Winternationals in 2018.

At the start, you see the rear wheels of her hot rod break loose, kicking the car sideways. Once those drag slicks gripped up, it shot her directly into the left lane wall, before she came back in the right lane. Luckily, her opponent Terry Haddock was able to dodge getting wrapped up in the crash.

Force did sustain some injuries, but was responsive with medical staff as they transported her to the hospital.

With drag racers being so close together during competition, there are times when these collisions wrap up more than just one car. John Force’s engine exploded during the NHRA Nationals in 2018, and things just got worse from there.

As his parachute deployed, Force’s funny car drifted into the other lane. This caused his chute to get caught on Jonnie Lindberg’s car, pulling them both into the wall. Watching the full video, we see Lindberg exit his vehicle. Force was transported to the hospital to be checked by medical professionals, but made his way back to the track in no time.

In the same fashion as Leah Pruett, Larry Dixon experienced a structural failure during the first round of qualifying at the 2015 Amalie Motor Oil NHRA Gatornationals.

Near the halfway point, his frame snaps, sending him flying into the air. He slammed back down and collided with the wall. Surprisingly, his car landed back on its wheels and skidded to a halt. He was examined by medical personnel and released while at the track.

Somehow, he still managed to win the final race, even though his car was completely destroyed. Now that’s impressive. He was checked out by medical staff, and walked away from this crazy event.

Pro Mod driver J.R. Gray had a tough break in Denver this past year. Originally, he was out front in the race, but his car eventually began to veer toward the center line.

He tried to fight it, but as soon as his rear tire touched the line, he lost traction, sending him sideways. He collided with the wall, and his pro mod flipped onto its roof, with the car eventually sliding to a halt.

Despite the severity of the wreck, Gray fortunately exited the car under his own power. It really is remarkable to see drivers escape these types of crashes without major injury.