Dale Jr. goes to bat for his nephew and has an intriguing suggestion for a team that could be a fit 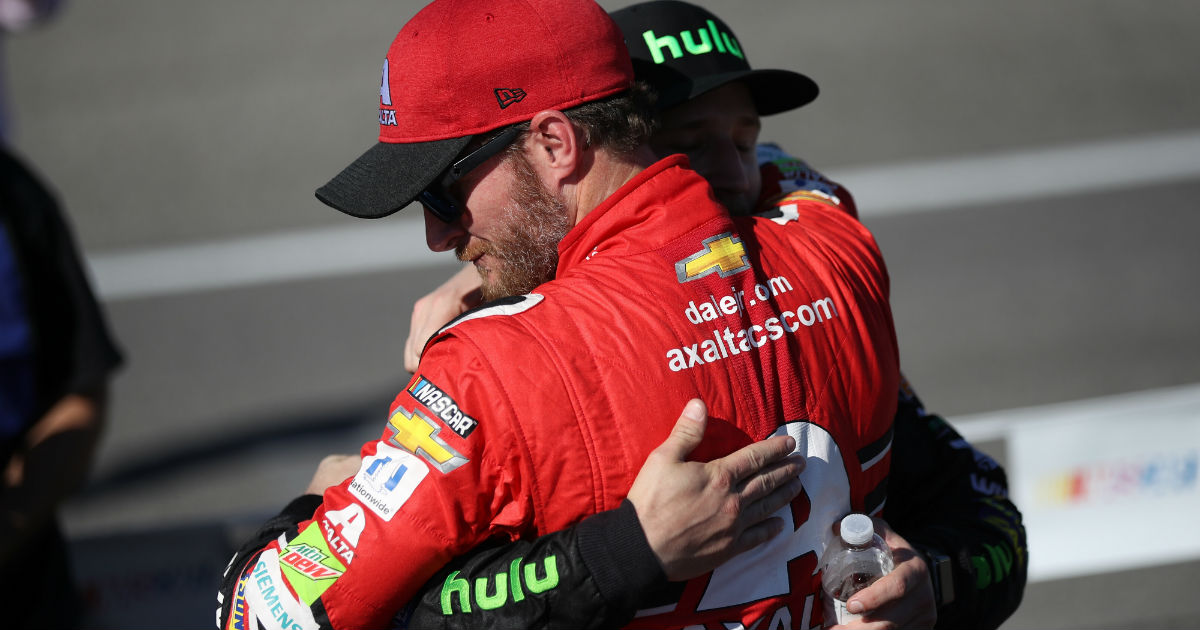 A day after Jeffrey Earnhardt took the shock of his life by losing his ride, his uncle took to  Twitter to offer some ideas for his continued pressence on the track.

Here’s what Dale Jr. had to say:

Hopefully Hulu stays with this kid. If they paired him with a Team_FRM or someone like that it would be a solid union.

Hopefully @hulu stays with this kid. If they paired with a @Team_FRM or someone like that it would be a solid union. https://t.co/jl3U0O9VmH

That’s interesting. Front Row Motorsports has one, maybe two seats open. The team let go of Landon Cassill so the No. 34 is open, thought Michael McDowell has been rumored to be a strong candidate; and while FRM has said it wants David Ragan back in the No. 38, it’s technically open because Ragan is a free agent.

For his part, Jeffrey Earnhardt noted the shock of being released from his contract by TMG Motorsports.

Well this comes as a shock to me just as much as everyone else but hey like your parents always tell u don’t cry over spilt (sic) milk one door closes for another to open so let’s see what’s behind this door.

He thanked everyone for their support and Dale Jr., replied with an arm making a muscle, as if to say, stay strong

Earnhardt, grandson of Dale Sr. was released from his contract after a partnership agreement involving his team abruptly fell apart.

Jeffrey Earnhardt has not had the on track success of his more famous namesakes, but he would have carried on a 40-year tradition of Earnhardts on the track.

The Earnhardt development came amid an announcement that Circle Sports had ended its relationship with The Motorsports Group.

TMG also announced it was looking for a driver and sponsorship, but made no mention that Earnhardt would not be returning to the No. 33.

In January, the teams announced their partnership called Circle Sport-TMG and both sides seemed happy about the arrangement. “It’s great to join forces with Curtis Key. I’ve known him for a very long time and know we share the same feelings about racing,” Circle Sport owner Joe Falk said in a news release at the time.

But something has gone amiss, and Falk decided to end the partnership, the teams said in a press release. TMG owner Curtis Key Sr., in the release, issued a terse statement: “We wish them the best. I will continue on this journey and look to rebound for 2018.”

This move leaves TMG scrambling for a driver and sponsors, but Key said he expects to make driver announcements in early January.

JMOORESVILLE, N.C., (December12, 2017) – The Motorsports Group (TMG) announced today that Circle Sport will be not be returning in the managing partnership for the 2018 Monster Energy NASCAR Cup Series (MENCS) season.

“We wish them the best”, stated TMG owner Curtis Key, Sr. after being informed of the decision on Monday morning, “I will continue on this journey and look to rebound for 2018”.

Eddie Pardue will continue with The Motorsports Group. Pardue who took over the crew chief role of the #33 Chevrolet midseason from Pat Tryson will serve as crew chief of TMG’s 2018 entries. “Eddie and I have known each other for a long time, since the Busch Series days, I am happy that he will continue on with us”, said Key.

TMG is currently seeking a driver and sponsors for next seasons entry, “This is sudden for us but we put a plan together rather quickly, we’ve had discussions with potential drivers but it’s only been a day since the news and we have more calls to make, we look to have a driver announce in early January”, added Key.

The TMG Chevrolet Camaro will debut at Daytona for Speedweeks in February 2018. There is currently sponsorship opportunity available for both primary and associate partners.